A devastating Indonesian mud volcano could not have been caused by a remote earthquake, researchers have said. Instead, they say, the Lusi eruption that began more than two years ago was most likely caused by the mining company failing to properly reinforce a problematic gas well.

Petroleum geologist Mark Tingay of Curtin University in Western Australia says the volcano was definitely not caused by an earthquake.

“None of the known methods by which an earthquake could have triggered this are plausible,” he said.

Since May 2006 the Lusi mud volcano has been burying villages around the east Javanese city of Surabaya. Seventeen people have died as a result of the eruption and around 40,000 are permanently displaced.

Some scientists, including UK geologist Richard Davies of the University of Durham and colleagues, believe that drilling for gas by the company Lapindo Brantas caused the explosion. Others, including the company, claim it was triggered by an earthquake that occurred two days before, 250 kilometres away near Yogyakarta, which killed 6,000 people.

Dr Tingay teamed up with Professor Davies and his colleagues to crunch some numbers, including available company data, to see which theory is best supported. The findings are published in the current issue of the journal Geology.

Dr Tingay says while remote earthquakes have triggered such events before, the numbers do not add up in this case.

“The magnitude of the Yogyakarta earthquake was at least 10 times too small to have triggered off any mud volcanic eruption at the Lusi site,” he said. On the other hand, the analysis did support drilling as a cause.

“All of the key ingredients necessary for a drilling to have caused the mud volcano were there,” Dr Tingay said. “There are critical safety issues that you have to maintain when you drill a well and we feel that a lot of those were breached.”

Dr Tingay says all wells should be reinforced using a steel and concrete “casing” or reinforcement at regular intervals to help stop fluids flowing into the well. He believes the company failed to properly reinforce a 2,800-metre deep well they were drilling.

“Setting casing takes up a lot of time and time is money,” he said. “They skipped two planned casing points.”

Dr Tingay says the company continued drilling and walls of the well eventually gave way. “They got into this dangerous situation. It’s a bit like driving at night in the wet with bad tyres and no lights,” he said.

The research says 40 to 60 cubic metres of fluid and hydrogen sulphide gas forced its way into the well and up to the surface. The company responded to this by closing off the surface of the well. “It’s effectively like putting a cork in the well,” Dr Tingay said.

He says the pressure in the well continued to build up enough to fracture the surrounding rock, resulting in an eruption of mud 200 metres away from the well.

Dr Tingay says dams are being used to hold back the mud, but he is worried is that these dams will break – made more likely as a 22-square kilometre area around the eruption is starting to sink. He says the Indonesian Government has recently decided to evacuate four more villages from the area.

The ABC’s attempts to obtain a response from Lapindo Brantas were unsuccessful. 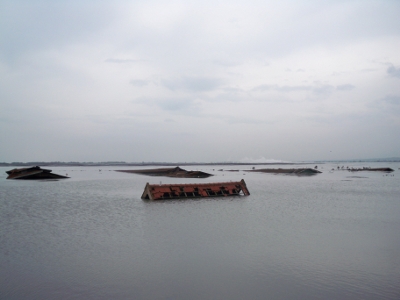