Devastation from a mud erupting volcano on the Indonesian island of Java is not caused by an earthquake as previously thought, claims a Curtin University of Technology geologist in a paper published in the current issue of Geology.

The Lusi mud volcano has erupted unabated for over two years, flooding 11 villages and displacing over 40,000 people in East Java.   Curtin researcher Mark Tingay, whilst working for the University of Adelaide, uncovered evidence of unsafe drilling practices prior to the eruption.  As a result he questions the theory that the 2006 earthquake which triggered the flow is the direct cause of this large scale disaster.

In his paper titled Triggering of the Lusi mud eruption: Earthquake versus drilling initiation Post Doctoral Fellow and lead author, Tingay explains the magnitude of the disaster and addresses the questions it provokes.

The May 2006 mud flow from the Lusi volcano caused unprecedented damage by flooding an area of seven square kilometres to depths of 20 metres over a two year period.  Although some scientists and the Indonesian government believe the mud flow was triggered by the Yogyakarta earthquake that occurred 250 km away and two days before the eruption, this earthquake is calculated to be too small in magnitude to have caused such devastation, Dr Tingay said.

Earthquakes have triggered events like this before, however the Yogyakarta earthquake was at least ten times too small to have triggered such a disaster, whilst the well that was drilled only 200 metres away from the volcano is the more likely cause.

Tingay claims that the skipping of two planned casing points during drilling of the Banjar Panji-1 (BJP-1) gas well meant that the borehole was not properly reinforced and thus vulnerable to a drilling accident known as a kick.

The BJP-1 gas exploration well, located 200 metres from the eruption suffered several drilling problems, including a large kick, during which we calculate pressures in the well were sufficient to fracture the rocks and create fluid flow pathways to the surface, Dr Tingay said.

The hazardously narrow drilling window in the BJP-1 well, together with the significant deviation from planned protective casing design, are widely regarded as unsafe drilling practices. Indeed, it is possible that this disaster could have been avoided had protective casing been set as planned.

Tingay and his co-authors provide a quantitative discussion of the long-running debate on whether the mud eruption was triggered by natural or anthropological events, with the owner of the BJP-1 well potentially facing damage costs estimated to be in the vicinity of US$420 million dollars if found to be negligent.

Seventeen people have died as a result of the eruption and around 40,000 are now permanently displaced as mud rises at rates of 100,000 cubic metres a day.  Thats the equivalent of over 50 Olympic swimming pools a day, Dr Tingay said.

The Lusi mud flow could continue flowing for over 10 years with the strong possibility that further problems will arise as a result of the area around the disaster area rapidly sinking.

Tingays paper can be viewed on the Geological Society of America site: http://www.gsajournals.org/perlserv/?request=get-toc&issn=0091-7613&volume=36&issue=8 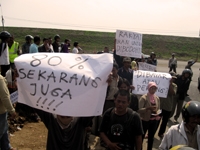