JAKARTA (Reuters) – A volcano that started spewing hot mud in Indonesia two years ago displacing more than 50,000 people was triggered by tectonic activity, experts working for the energy firm blamed by some for the disaster said on Thursday.

The comments contrast with the view of an international team of experts who said on Monday that drilling for a gas exploration well, and not an earthquake, set off the volcano in East Java.

A geologist and drilling expert working for oil and gas firm Lapindo Brantas said that the international team, led by Richard Davies of Britain’s Durham University, had based their findings on the wrong data and assumptions.

“Experts opinion, Davies and others, that concluded that the burst came from the drilling well is based on a study that used the wrong data and assumption,” Edy Sutriono, drilling expert at Lapindo, told a news conference.

The international team had said records kept by Lapindo during the drilling of the gas exploration well called Banjar-Panji-1 showed an underground blowout that could have triggered the disaster.

But Bambang Istadi, a geologist at Lapindo, said tectonic activity had caused an old escarpment to crack and become the channel for the mud to flow.

The company and some experts have argued that the mud flow was caused by a 6.3 magnitude earthquake in Yogyakarta and its aftershocks that happened two days before the eruption. That quake, centred 160 miles from the mud volcano, killed 6,000 people and left 1.5 million homeless.

Richard Davies told Reuters on Thursday that the well was being drilled next to a mud volcano at the same time it erupted.

The hot noxious mud began spewing near the gas exploration site in Sidoarjo, in East Java, on May 29. “I mean, it’s just I’m sorry, there’s just too much evidence now to propose that this isn’t due to the well,” he added, noting there would be a public debate with Lapindo experts on the issue in late October this year in Cape Town, South Africa.

A mud volcano is usually a naturally occurring phenomenon created when a mix of mud, water and gas forms underground and is forced to the surface. There are a few thousand on earth.

The situation has also become a major embarrassment for the government since Energi is owned by the Bakrie Group, controlled by the family of chief social welfare minister, Aburizal Bakrie.

Indonesia’s government has ordered Lapindo to pay 3.8 trillion rupiah ($408.1 million) in compensation to the victims and to cover the damage ($1=9311 Rupiah). 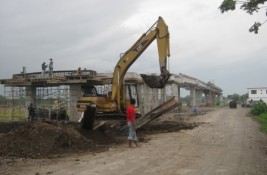