On May 29, 2006, PT Lapindo Brantas, an Indonesian energy company, was drilling a wildcat well, the Banjar-Panji-1.

The driller had struggled through 2,500 feet of clays, underlain by gritty sands and volcaniclastics, and decided to drill ahead into porous limestone below 9,000 feet without stopping to set casing. That was a mistake. At about 5 a.m., a fissure opened about 600 feet from the wellhead, and steam, water, hydrogen sulphide, and methane began to escape. Shortly afterwards, hot viscous mud began to flow rapidly from the fissure. It has been flowing ever since, taking with it homes, factories, livelihoods, crops, roads, railways, and reputations, and creating a huge industrial scandal that will have serious repercussions.

The Banjar well is one of the most environmentally destructive oil and gas wells ever drilled. The toxic mud has been flowing for 18 months now  and could flow for decades to come  at rates of up to 150,000 cubic meters per day. To date it covers at least 2.5 square miles with a billion cubic feet of mud that is quickly turning into mudstone.

Lapindo Brantas was operating the well on behalf of its two partners: Santos, Australias third-largest oil and gas company, and Medco Energi of Indonesia. The wells target was natural gas deposits in the Sidoarjo area of eastern Java, an area characterized by mud volcanoes. And the fact that Java is the most densely populated island on earth is what makes the Banjar wells toxic mud volcano so destructive.

The already horrific catalogue of damage continues to grow. The mud has displaced 13,000 people from their homes. It has inundated 11 towns, 30 schools, 25 factories, a national toll road, and the state-owned Sidoarjo-Pasuruan railway line. It has buried rice paddies and shrimp farms. (Sidoarjo was the second largest shrimp-producing town in the country.) It has also shut down one of east Javas key industrial hubs with a slow-moving tsunami of hot, sticky, smelly mud that hardens to rock as it dehydrates and cools. It caused a Pertamina-owned gas pipeline to rupture and explode, killing 11. Environmental damage is estimated at between $5 billion and $10 billion.

If this had happened on the edges of a city, the political response would have been immediate. But these are rural Indonesians, and since they have no money, and therefore no political voice or leverage in post-Suharto Indonesia, they stay displaced, uncompensated, and, until recently, ignored.

A network of levees and dams has been erected to contain the mud, but have not been successful. Some sludge is pumped into the Porong River, but this has not been successful either; much of the sludge is insoluble and sits in the river in blocks. The rest is rapidly silting up the river and its delta and affecting its flow, causing flooding.

The mud, containing a dangerous cocktail of benzene, toluene, xylene, heavy metals, ammonia, and sulphur dioxide, is rendering the river lifeless and its estuary barren. The government has proposed channelling the mud to the sea by canal, but this has some obvious drawbacks and has not been tried (yet).

Other methods to contain the flow have been tried. The national governments response team air-dropped 1,500 large concrete balls connected by steel chains into the fissure. But that only made the mud flow faster. Japanese contractors proposed building a high-pressure pipeline to divert the mud to the coast for land reclamation. Local authorities brought together 50 mystics to use their supernatural powers to stop the mudflow, for an $11,000 prize. In another bizarre twist, Lapindo Brantas funded production costs for a 13-episode television soap opera called Digging a Hole, Filling a Hole to highlight and dramatize stories of the companys heroism. Needless to say it was not a big hit.

More recently, the Japan Bank for International Cooperation offered loans of $110 million to build a 130-foot high containment dam around the mudflow, on the theory that the weight of dammed mud would eventually cut off the flow.

The technical post mortem appears straightforward: Lapindo Brantass drill bit penetrated an overpressured reservoir, causing hydrofractures to propagate outwards from the uncased hole and upwards into the overlying seal, rapidly entraining mud, gas, and water to the surface under high pressure. Unfortunately for the victims, the technical explanation is the only thing about this disaster that is straightforward. The rest would give Kafka nightmares.

Perhaps the dramas most surreal aspects concern Lapindo Brantas and its owner Aburizal Bakrie, one of Asias richest men who also happens to be a senior executive of Golkar (the ruling party) and the former minister for economics. Hes also currently the ironically titled Minister for the Peoples Welfare, a financial backer of President Susilo Bambang Yudhoyonos 2004 election campaign, and one of the vice presidents closest friends. (Bakrie was closely tied to the former Indonesian dictator, Suharto. In the 1990s, those ties helped him to obtain a substantial ownership stake in Freeport-McMoRan Copper & Gold, the U.S. mining outfit that operates the massive Grasberg mine in West Papua. Bakrie sold the Freeport stake in 1997.) Rather than resign his portfolio, Bakrie has tried to convince the government that Lapindo Brantas was just in the wrong place at the wrong time, an innocent witness to a natural disaster. On two occasions he has tried to sell Lapindo Brantas to escape liability, but has been blocked by the financial regulator. The first proposed sale was for $2 to an unnamed offshore company. The second, for $1 million, was to a U.S.-based outfit run by American friends of the family.

Recently, partner Medco Energi accused Lapindo Brantas of gross negligence in the operation of the Banjar-Panji-1 well. Shortly after that bombshell, the police opened a criminal investigation into the actions of 13 senior managers and engineers at Lapindo Brantas.

Until recently, Lapindo Brantas was allowed to choose, on a purely voluntary basis, how, why, and whether to compensate those people and businesses affected by the mudflow. It offered some families payments of up to $540 to cover two years displacement rental, $60 in moving costs, and $35 per month for food, if they agreed to free Lapindo Brantas from any further liability.

Most residents rejected the offer, preferring to keep their options open. The company also claimed it was spending $2.4 million per day on efforts to stop or divert the mud, but this was subsequently found to actually be just under $300 per day. Recently, Indonesias President Yudhoyono issued a decree ordering the company to bear all costs and repercussions of the disaster, and pay compensation to those displaced. But since the decree has no legal consequence, it became apparent that this was another Kafka-esque way to avoid paying anything to anyone. The government has tried to minimize the political damage by setting aside $127 million from the state budget for compensation payments. But the applications are to be screened by a 50-person committee!

Politicians are outraged because it appears that the government is bankrolling Lapindo Brantas and the Bakries. Citizens are skeptical that they will ever see any of the money.

Many analysts predict that the Bakrie Group will simply resort to bankruptcy rather than foot any of the multi-billion dollar clean-up and compensation costs. They are money men, not oil men, and wont lose any sleep if this forces them out of the oil and gas business for good. It is the prudent operators in Indonesia, trying to conduct their activities safely and with a commitment to the country, who will have to live with the aftermath.

All of which is music to the ears of law firms that specialize in class-action suits. There are legal precedents for hearing offshore class actions in Australia when Australian companies are involved. So look out, Santos. Although it is only an 18 percent non-operating partner in the project, Santos is the only solid target in this whole sorry saga. The company has set aside about $60 million in its current budget to cover liability arising from the mudflow. But litigation experts in Australia believe that amount could underestimate Santoss liability by as much as two orders of magnitude. 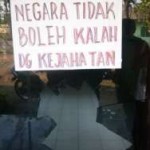