It is one year today since huge quantities of mud started to ooze from the site of a gas exploration well, part-owned by Santos, being drilled deep underground at Sidoarjo.

All efforts to stop the mudflow have failed, and the grey-brown sludge has smothered nine villages, schools, mosques, factories and rice paddy fields across an eight square kilometre area.

About 160,000 cubic metres of mud continues to seep out of the crater every day. Protesters today demonstrated outside the South Jakarta District Court, where environmental NGO Walhi has launched civil action against 12 defendants including Santos, which has an 18 per cent stake in the Banjar Panji exploration well.

The protesters threw mud from the disaster outside the court, sang and waved banners reading: “One Year Lapindo Mud, Happy Birthday”, before filing into the packed courtroom for the hearing.

Others named in the lawsuit, include Indonesia’s President Susilo Bambang Yudhoyono, two cabinet ministers, Santos’ partners in the project Lapindo Brantas and PT Medco Energi, and the East Java and Sidoarjo governments.

Walhi lawyer Taufik Basari accused those involved of breaching environmental and civil laws, and asked the judge to order the parties to pay compensation for the “great impact on the environment”.

It alleged that the mudflow had been “ignited by the activities” of Lapindo, the well operator. “The hot mud material came out from points at or around the location of drilling,” Walhi documents filed with the court said.

“The mudflow has created hugely negative environmental damage, and a damaging impact on society, especially ecologically, economically, socially and psychologically, and the loss is unlimited.”

It called on the court to impose a moratorium on drilling in the Brantas exploration block, and order those involved to “apologise to the Indonesian people”. It said Santos was also responsible for the damage to the environment because of its “participating interest agreement” with Lapindo.

Lapindo attempted to have the charges dismissed, arguing that Walhi did not have the legal authority to mount such a lawsuit and was not a properly formed legal entity. “Because its not a legal body, the charges don’t have legal standing,” Lapindo lawyer Akhmad Muthosim said.

Santos lawyer Yulianto also called on the court to dismiss the charges against Santos, saying the Indonesian government had already ordered compensation be paid.

He said the company had not violated any laws or been negligent. “The charges are failed and not needed,” he said. The hearing is due to resume next week. 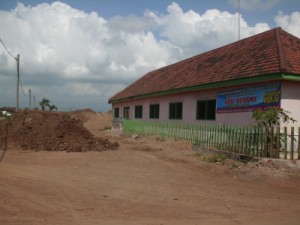