The people of Sidoarjo gathered to say prayers this week. Beside a noxious sea of shifting grey mud they asked for help to rebuild their lives and for deliverance from further encroachment by the methane-spitting sludge.

Already 13 people from this district in the east of the Indonesian island of Java have lost their lives to the world’s largest mud volcano, and a further 50,000 have been made homeless. Every day as the volcano continues to spew forth hot mud, more people and their villages are threatened. Schools and factories have had to be moved.

An Indonesian court says this is a natural disaster. Yet human rights campaigners, as well as a team of scientists from Durham University, say the mud volcano that has been named Lusi was triggered by a gas-drilling operation two years ago. What gives this story an added twist is that the company is owned by the family of the country’s richest man, who also happens to be Indonesia’s Welfare Minister.

The images of Lusi are nothing short of remarkable. The area at the very centre of the volcano has been surrounded by 20m-high concrete walls erected by the authorities to try to stem the flow. But already, the area now covered by the splurging mess totals more than 1,500 acres.

Worse still, there are signs that the entire area is sinking and forming a huge crater. “The centre is falling by 4cm a day, which amounts to around 14m a year,” said Professor Richard Davies, head of a team from Durham University which has studied the volcano. “Sidoarjo is a populated region and is collapsing as a result of the birth and growth of Lusi. This could continue to have a significant environmental impact on the surrounding area for years to come.” He said the plunging volcano could cause other fractures and faults within the landscape and even begin to start shifting the course of rivers.

Professor Davies said his team was 99 per cent certain that the volcano had been triggered by gas drilling in the region two years ago. He said it appeared workers from the Lapindo Brantas company had drilled to more than 3,000 metres and tapped into a water-bearing aquifer that was located beneath a seam of mudstone. The effect had been to release the pressure in the aquifer, causing the water to push out through the mudstone, creating a volcano of mud.

That initial eruption two years ago this week killed 13 people and inundated 12 villages with a flood of mud. Every day since the volcano has continued to produce between 50,000 and 150,000 cubic metres of mud  enough to fill 60 Olympic-sized swimming pools.

Yet the people of Sidoarjo say they have received barely any help or compensation from the government or Lapindo Brantas, which is owned by the family of the billionaire government minister Aburizal Bakrie. While thousands live in makeshift shanties waiting for help and refusing to move, the company this week took out advertisements in newspapers proclaiming its “social commitment” to the area but insisting experts believe the volcano was a natural phenomenon.

Last month, the company stopped giving out food rations to displaced villages and said they should accept the compensation that had been offered. The homeless insist instead that they be given a lump sum to build new homes. “They can’t live there for ever. They should immediately submit documents and accept the compensation,” said a company spokeswoman, Yuniwati Teryana.

Last year the authorities ordered the company to pay more than £220m in compensation and for work to halt the spread of the mud. But campaigners say only residents in four of the villages affected by the mud were eligible for compensation and that, of those people, only 20 per cent have so far received any money from the oil and gas giant.

Campaigners say the government is unwilling to challenge the company to do more. No one has been charged with any crime in relation to the volcano. Chalid Muhammad, who heads a campaign group, the Movement to Promote Justice for the Lapindo Victims, said: “The government only needs to have the political will and the political courage to push the company to pay compensation.”

All the while, as the people of Sidoarjo pray for help and as Lapindo Brantas continues to deny responsibility for what happened, the world’s largest mud volcano continues to spew mud and grow. Every single day. 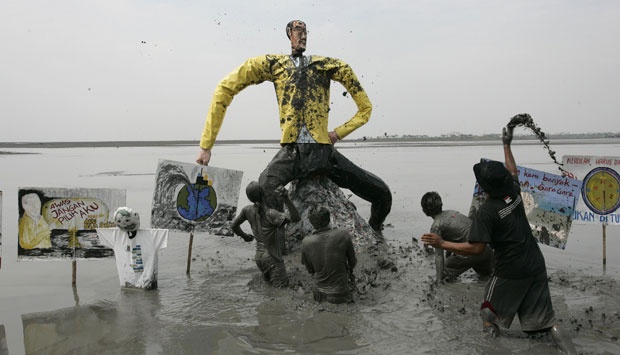 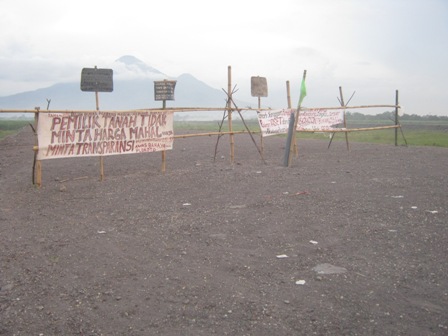