The issue has become a major problem, discussed at a meeting of the Japan Club in Surabaya last week, chairman of the East Java Investment Board (BPM) Djoni Irianto told The Jakarta Post here Tuesday.

A number of Japanese investors had expressed interest in the province, but decided to hold back until they receive a satisfactory explanation to at least three of their four questions regarding the disaster, he added.

“We were given until Friday to respond to their questions,” Djoni said.

The three questions concern the relocation of a section of the Surabaya-Gempol toll road, land subsidence on the Porong artery road and the possible overflow of Porong River, into which the mud has flown, he added.

A forth question concerned the possible threat of avian flu, especially given outbreaks across Indonesia over the past four years. A leak that began on June 29, 2006 at Lapindo Brantas Inc.’s mining site became a mudflow disaster that has thus far buried at least four villages, displacing some 13,000 villagers.

The mudflow has also damaged Porong highway, a railway line, and the Gempol toll road, causing soil subsidence at the disaster site.

Many Japanese investors in Pasuruan have had to spend more on production costs, particularly to transport products and raw materials as a result of the damaged road, Japan Club chairman Hajime Matsuda sat at the meeting.

“That has made it difficult to compete with companies in Sidoarjo and Gresik, two other industrial zones in the province,” Djoni quoted Hajime as saying.

“We are proud of the investors’ commitment because many have repatriated their experts and senior staff instead of dismissing low-income workers, to cope with the additional transportation costs,” he said.

The congested Porong artery and toll roads are the only links connecting Pasuruan with the port and the provincial capital, he added.

Japanese investors want the industrial zone to provide an integrated service center, including for tax and excise examinations and for investment permits, Djoni said.

With such a center, they could begin operations relatively quickly, despite having to pay extra.

“That is why BPM sought a deadline from the government on the completion of the toll road relocation, the handling of bird flu and other issues that could make foreign investors reluctant to invest in the province,” Djoni said.

BPM established an investment clinic last month to provide accurate information on whatever foreign investors need to know to invest in the province, he added.

Djoni was confident more foreign investors will be attracted to the province, which he described as an excellent alternative investment destination, after Jakarta and Riau.

In actuality, East Java is not trying to compete with those areas, but with Malaysia and Thailand, especially because the province’s infrastructure and regulatory environment are considered business-friendly to foreign investors, with the government working hard to eliminate barriers and costs, he added.

The province has continued developing its potential in the provision of raw materials for mining, agribusiness and trading, a new sector that has attracted many Chinese investors, Djoni said.

“Entering their second semester this year, Chinese investors have been taking the lead in the trading sector with 60 percent of their investments, worth US$54.2 million,” he added.

The US$29.5 million in Japanese investment comes fourth, after Singapore’s $214 million and South Korea’s $40.3 million, he said.

For the past eight months, the provincial government has issued investment permits for 45 foreign investors, in addition to expanding permits for 19 others in Gresik, Sidoarjo, Pamekasan, Malang and Tuban. 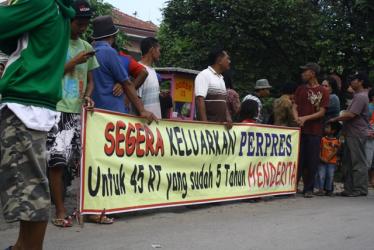