As it has in the past, the Indonesia government stepped in Wednesday to stop the unravelling of the empire of the politically powerful Chief Welfare Minister Aburizal Bakrie with a deal to allow government-owned companies to buy shares in Bakrie concerns – and apparently let the Bakries stay in control.

Shares in Bakrie & Brothers and its five subsidiaries, PT Bumi Resources, Energi Mega, Bakrieland, Bakrie Telecom and Bakrie Sumatera Plantation were suspended from trading on October 6 amid wild gyrations in their share price that wiped out 30 percent of their value, with a devastating effect on the rest of the local market. The Indonesian Stock Exchange was closed for three days amid the carnage after falling by 21 percent, the biggest fall in 20 years.

The market reopened Monday but without the Bakrie companies, which remained suspended while the group said it was working on a deal to sell a raft of assets — including a stake in coal miner Bumi, at one time the biggest company on the exchange – to pay off $1.2 billion in debt. Shares in Bumi are down 74 per cent since their peak in June.

However, the Minister for State Enterprises, Sofyan Djalil said Wednesday that state-owned PT Aneka Tambang and PT Tambang Batubara Bukit Asam would be allowed to buy shares in Bumi if they want, which almost certainly means they will. That way the Bakrie family may still be able to maintain control over the company despite a reduction in their 35 percent stake.

That decision is likely to be greeted by less than enthusiasm on the part of the electorate, and could spell trouble for President Susilo Bambang Yudhoyono, who has made erasing corruption and cronyism a major goal of his administration, so far with less than notable success. Although he has moved up recently in the polls, Yudhoyono is locked in a close race with former President Megawati Sukarnoputri in the runup to the presidential election next April.

While the Bakrie enterprises are hardly as important to Indonesia’s economy as Fannie Mae or AIG are to the US, the alternative to saving Bakrie is not saving him, something that could be politically unappetizing for Yudhoyono, who so far doesn’t appear to consider himself independently powerful enough to let the Bakrie group go.

Despite the fact that he was a general himself, Yudhoyono got considerable backing for his 2004 election came from Kadin Indonesia, the Indonesia Chamber of Commerce, which has long-standing links to Sofyan’s State-Owned Enterprises Ministry.

Kadin is a national network that reaches across Indonesia and although it isn’t a political party it is comparable in reach to Golkar, Megawati’s Indonesian Democratic Party of Struggle (PDIP) or Tentara Nasional Indonesia, the armed forces. Golkar, the biggest electoral party and once the vehicle of the late strongman Suharto, backed the former armed forces commanding general Wiranto, leaving Yudhoyono to look elsewhere for support. The chamber was important to his election plans and allowed him to cast himself as a friend of business.

Bakrie is also close to Vice President Jusuf Kalla, a man in an uneasy relationship with Yudhoyono and who could easily turn into a presidential rival. Bakrie and Kalla represent an Indonesia of an earlier era that Yudyono can’t quite shake despite his best efforts, nor can Indonesia with its culture of corruption.

Earlier this year, although scientists insisted the disaster was caused by dodgy work, the government took responsibility for the multi-billion dollar cleanup of Indonesia’s worst-ever environmental disaster, which occurred in 2006 when a gas well being drilled by PT Lapindo Brantas, a Bakrie-controlled company, blew out into a catastrophic mudflow that so far has displaced 75,000 villagers and wrecked a vast swath of territory in East Java. Bakrie has so far paid out Rp4 trillion to the displaced villagers.

Whatever the rescue package looks like this time around, the power of the Bakrie Group will almost certainly be diminished, in the short term at least, as it struggles under a mountain of debt. There has been much speculation over the past year about Bakrie’s plans to rival Qatar Telecom for a stake in the country’s second biggest mobile phone player Indosat and do a deal with three local governments to eventually takeover the profitable Batu Hijau copper and gold mine, now operated by US mining giant Newmont.

But the Bakrie family will instead be focused on disentangling itself from debt arrangements, where shares in its subsidiaries have been used as collateral. Those pledged shares, initially valued at US$$6 billion, slumped to US$1.35 billion on October 6, creating the current mess.

While the focus has been on the Bakrie family, the impact of the global financial crisis on Indonesia is much broader. Investors around the world are now officially risk-averse, and that means pulling money out of emerging markets like Indonesia, despite its strong economic fundamentals and 6.5 percent annual gross domestic product growth.

Earlier this week, the government boosted deposit insurance to cover accounts up to Rp2 billion (US$203,000) from Rp100 million previously, in a bid to avoid a run on the banks. Bank Indonesia has also eased the rules for banks raising short-term funds in an effort to increase liquidity.

The government also reduced its forecast 2009 budget deficit to 1.3 per cent of GDP from 1.7 per cent. That means it will require less funds to finance the deficit as selling bonds is harder to do in the current environment with investors demanding significantly higher yields.

Despite these measures, the market is expected to be volatile in the short-term, buffeted by other world markets and as it awaits a resolution on the Bakrie companies.

“I think the stock market authorities need to go faster in trying to punish speculators who really disrupt the market,” he said. “That is the key thing that will bring back confidence.”

“The jitters are still there. Domestic investors are also panicking. It’s not just the foreign investors who want to pull out.” 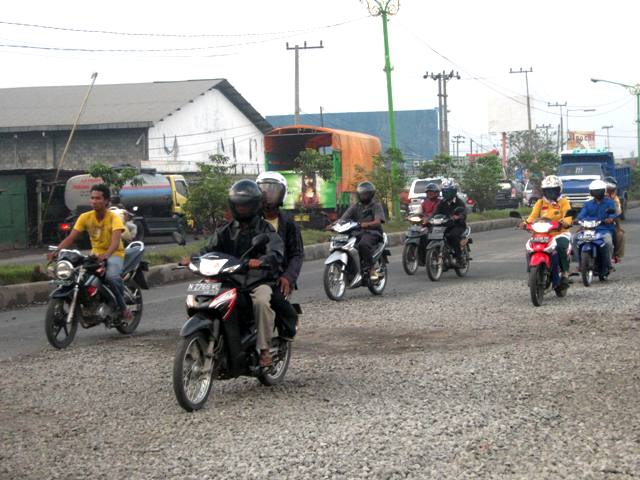