SIDOARJO TEARS: Mariati, 43, (right) a victim of the Lapindo mudflow in Porong, Sidoarjo, cries after conducting Ied prayers next to a hot mud retention dam on Wednesday. Mariati said her father died from deep depression that resulted from the disaster which had devastated their house and farmland. (JP/Indra Harsaputra)

The Jakarta Post, Sidoarjo – Mariati, 43, (right) a victim of the Lapindo mudflow in Porong, Sidoarjo, cries after conducting Ied prayers next to a hot mud retention dam on Wednesday. Mariati said her father died from deep depression that resulted from the disaster which had devastated their house and farmland.

Thousands of mudflow victims in Sidoarjo, East Java, said their Ied prayer for Idul Fitri by the hot mud that covers their assets and culture, their hopes of soon receiving more cash compensation fading fast.

All the attendees, wearing Islamic attire, said their Ied prayer while facing the vast pool of mud — still spewing out hot liquid and odorous gases — under which their houses, land and dead relatives are buried, never to be seen again.

This was the third time the mudflow victims performed their Ied prayer on the raised round dikes since the mud first began to flow from the mining site of energy company Lapindo Brantas Ltd on May 29, 2006.

“Right from the beginning, Lapindo has done nothing, by either thought or donation, to help us with a house of worship. Even worse, the mudflow has submerged a mosque built by residents of the four devastated villages,” Muhayatin, 38, a former resident of the submerged village of Renokenongo, told The Jakarta Post after the prayer on Wednesday.

“All we have — the social community and the culture built over many generations — has been submerged below the drying mud.”

She said they had decided to perform the Ied prayer at the disaster site not only to honor their emotional connection to their lost community and dead relatives, but also as a reminder they had not received the remaining 80 percent compensation that should have been paid last month.

She admitted she had received Rp 42 million (US$4500) in compensation — 20 percent of the total — for her home and land. But that was two years ago, she said, and she had no more money to pay the rent, support her family and finance her four children’s education.

“We are praying here not to celebrate our victory over the monthlong fast, but to recall our lost community and our two years of pain in exile,” she said.

“We are now strangers in our new environment after living in poverty for two years with no certainty about the payment of the remaining 80 percent compensation.”

The community that had been lost was one major asset that no amount of money could compensate for, she added.

Muhayatin, formerly a worker in a factory also destroyed by the mud, has no job now. Her husband has to work as a parking attendant near the mud, with a monthly income of about Rp 300,000 per month.

“This sum is not enough to meet our daily basic needs,” she said.

Another local, Mariati, who looked sad as she recalled the disaster, said she was thinking of her father Muntari, who died aged 75 in a deep depression over his house and other assets that were buried by the mudflow.

“I have no more tears. Lapindo and the government should not make me cry again over the suspended payment of the remaining compensation,” she said.

Lapindo spokeswoman Yuniwati Teryana said her company would pay the remaining compensation as soon as possible.

“We are appealing to mudflow victims to be patient. We will pay the compensation as stipulated by the 2007 presidential regulation,” she said. 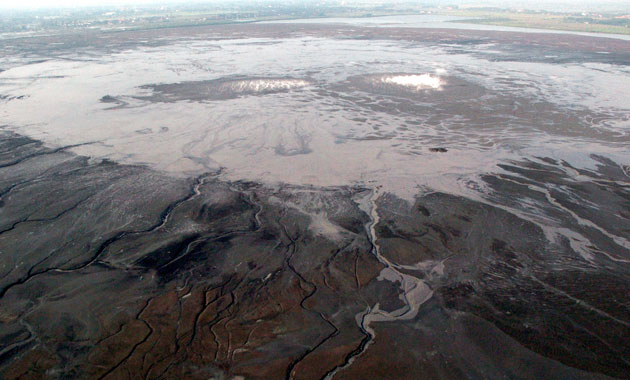