A number of state and private companies are exploring the possibility of forming a consortium to purchase a stake in the Bakrie family’s most valuable company and the world’s largest exporter of thermal coal, PT
Bumi Resources.

Antam corporate secretary Bimo Budi Satriyo told The Jakarta Post Thursday some of the state firms involved were still studying the plan, and no progress had been reached thus far.

“This is not going to be an easy decision. We want to make sure the purchase will benefit the companies. We also need to seek sources of funding,” he said.

When asked about the exact time for the arrangement, Bimo said it depended on PTBA, which was the most active in trying to secure the stake as it bids to add its coal reserves into the firm’s portfolio.

State enterprises minister Soyfan Djalil said the deal would be based on a business-to-business agreement, and the government would not interfere, other than by approving the deal.

“The state firms need to team up with the private sector to acquire the stake because the cost will be huge. This is a strategic decision for the companies to take. We will not interfere,” he said.

The powerful Bakrie family, headed by none other than Coordinating Minister for the People’s Welfare Aburizal Bakrie, is being forced to sell assets to help settle financial obligations to a number of creditors.

But the plunge in the value of the shares following the global financial downturn has sharply slashed the collateral value, forcing Bakrie to either pump in fresh capital or face the risk of losing control of the pledged shares.

On Oct. 12, Bakrie & Brothers offered investors shares in its units to help raise some $1.2 billion to repay its debts.

Bakrie announced late Thursday it had completed the first phase of the offering.

Bakrie also announced that negotiations with a domestic consortium interested in buying PT Bakrie Telecom were still underway, as well as a discussion with a number of local and foreign strategic buyers for Bumi.

Indonesia Stock Exchange (IDX) president director Erry Firmansyah said three Bakrie companies would be allowed to resume trading on Friday, as they were expected to submit a complete disclosure of the ongoing stake offerings.

“We need to know how the restructuring process is being settled and who the buyers are. We will not lift the suspension until there is a clear disclosure,” he said, refusing to name the firms set to resume trading.

Besides its prominent role at the helm of the country’s biggest business empire, the Bakrie family is also politically powerful, having helped finance President Susilo Bambang’s campaign in the 2004 presidential campaign. (iwp) 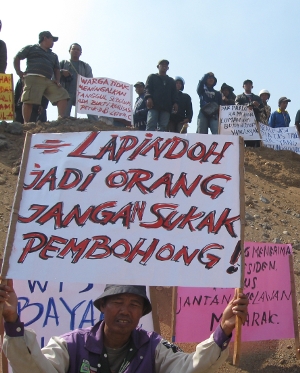