TEMPO Interactive, Sidoarjo: Around 500 people from four villages — Siring Barat, Jatirejo Barat, Mindi in Porong sub-district, and Besuki Timur in Jabon sub-district – resumed their protests at the former Porong toll road or what has now become the under belly of the toll bridge in Besuki village.

They held communal prayers at the site. “We are still demanding the same thing. The four villages must be included in the map like other villages,” said Irsyad, Besuki Timur residents’ coordinator.

Irsyad said the four villages are now uninhabitable because half the areas were affected by the mudflow while the other half were damaged by flammable gas.

The village most affected by the mudflow is Besuki Timur, while the gas hit Siring Barat, Jatirejo Barat, and Mindi. For this reason, the residents have urged the House of Representatives (DPR) to allocate a budget on their behalf, when the 2009 National Budget is drafted. 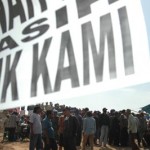