Victims blame a mining company for a volcanic mudslide that took their homes.

In the final part of its series on Corporations on Trial, People & Power’s Juliana Ruhfus visits East Java where Scientists and Indonesian activists allege a devastating volcanic eruption three years ago is a man-made disaster but lawyers are facing an uphill battle to gain compensation for the victims.

Walking across the hardened mud, Sodikun points out where a mosque and a nearby kindergarten once stood.

“This was the road to the kindergarten,” he says. “It was the main road, it was seven metres wide.”

The area is now encased in at least 10m of mud and Sodikun is among 40,000 Indonesians rendered homeless after Volcano Lusi erupted on May 29 2006 disgorging a current of sludge that engulfed 7sq km of land, encompassing twelve villages near the town of Porong in East Java.

The volcano is still active, pumping out enough mud daily to fill 50 Olympic swimming pools, and the eruption provoked a controversy that has involved lawyers, scientists and the Indonesian government.

Just 150 metres away from the volcano an Indonesian mining company called Lapindo Brantas was drilling for gas and, according to many experts, this leads to only one conclusion.

“There’s a substantial amount of information, that just cannot be refuted, that shows that drilling was the cause of the Lusi mud volcano,” Richard Davies, director of research into earth sciences at Durham University in the UK, says.

Confidential reports from leading drilling experts obtained by Al Jazeera lend weight to such accusations but Lapindo claims the cause of the eruption was an earthquake two days earlier, 260km away in central Java.

“The experts in Jakarta, all over the world have already said that it is not because of the Lapindo drill, but because of the earthquake,” says Aburizal Bakrie, the government’s co-ordinating minister for social affairs.

Bakrie’s family’s company is the majority shareholder in Lapindo and for human rights lawyer Taufik Basari, who has been suing both Lapindo and the government over Lusi for three years, that constitutes a disturbing conflict of interests.

“We want to urge Lapindo to have full responsibility to cover all the loss. On the other hand we want to pressure the government to stand behind the victims, not the company,” he says.

Days after the eruption, public anger forced the government to commission a team of experts to investigate, which cited drilling as the probable cause for the eruption.

Later in 2006 Susilo Bambang Yudhoyono, the Indonesian president, ordered Lapindo to pay for dealing with the mudflow and to buy the land and property beneath it from the victims, despite the fact the company’s responsibility had yet to be determined in court.

The process was overseen by Djoko Kirmanto, the public works minister, who admitted to Al Jazeera that it was “unusual” for a company to pay out before admitting liability.

Lapindo, however, is very keen to showcase the new village it has been building for some of Lusi’s homeless.

Sunaryo  Suardi, the head of media for the company, says that although only 300 people have received keys to their new homes up to 10,000 people will eventually reside in the village.

Those victims not living in Lapindo’s model development have had to take an initiative and have turned the dam around their former village is Indonesia’s latest tourist attraction.

Muslimah used to sell snacks from her home before it was drowned in mud. She now offers tourists motorbike rides around the disaster area. Seven people lived in her house before the mudslide, including her father.

“After our house was flooded with mud he was so distressed that he passed away,” she says.

A market being built in nearby Porong provided shelter for 10,000 other locals. Three years on a quarter of them are still there.

According to the presidential decree Lapindo was to pay 20 per cent up front for the victims’ property and the rest within two years.

That deadline passed in December 2008 and many have not been paid the money still outstanding with the government blaming the global recession for the delay.

“We also urge the government to create the policy to urge or to command Lapindo Brantas to compensate not only the property, also their rights, their human rights, education, social, economical and health,” Taufik Basari says.

In 2007 the Jakarta district court ruled against Basari’s case judging both Lapido and the government were doing enough for Lusi’s dispossessed.

Basari appealed urging for a clearer decision-making process rather than “secretive” presidential decrees and the case moved onto the scientific question at the heart of the case – whether drilling was the cause of the eruption.

At Lapinto’s gasworks in nearby Sidoarjo employees are in no doubt drilling was not and claim the company was also a victim of the mudslide as its drilling rig facility was flooded.

As the world’s fastest-growing mud volcano, Lusi has drawn the attention of scientists from across the world.

Richard Davies believes that the earthquake theory goes against all accepted knowledge of how mud volcanoes are triggered.

“What we’ve done is to team up with earthquake specialists, the best people in the world, to look at the earthquake mechanism, and they’re adamant this just could not have triggered Lusi,” he says. “I mean, I can’t overemphasise that point, the earthquake was too small and too far away.”

Davies has been working with a group of Indonesian engineers who call themselves the Drilling Club.

“The magnitude of the quake at the location was like a truck passing by the roadside,”Susila Lusiaga, a drilling engineer says. “The well could have been blowing out a long time ago because there are thousands of truck passing by every day through that road.”

The Drilling Club and Davies agree that Lapindo’s drill punctured a pressurised layer of water nearly 3km down in the earth and say the company did not put steel casing deep enough into its well to protect it from pressure below, and that extra precautions should have been taken in such a geologically unstable area.

The same accusation has been made by one of Lapindo’s own partners in the drilling project.

In a letter leaked to the press in late 2006, Medco Energi said that at a technical meeting before the disaster it reminded Lapindo of the need to set casing deeper into the well.

Lapindo refute the claim. In an interview with Al Jazeera, Iwan Soemantri, a senior exploration manager with the company, said Medco maybe wrote the letter to “escape their own responsibility”.

Since that interview Al Jazeera obtained two confidential reports about Lapindo’s operation which Medco commissioned from some of the world’s top drilling experts.

They are damning of Lapindo’s handling of the drill site, describing it as both “incompetent” and “reckless”.

At a conference of leading geologists about Lusi held in Cape Town in December 2008 a straw poll was taken where the majority of the 74 international experts present voted that drilling was responsible for the volcano. Only three thought it was solely the earthquake.

Yet in 2008 Taufik Basari’s case was rejected by the appeal court. The judges upheld the verdict that enough was being done for the victims, and also ruled – in the face of most scientific opinion – that the volcano was not Lapindo’s fault.

Taufik decided to take the case to the highest level – Indonesia’s supreme court.

“I think our government is afraid of Lapindo because one of the supporters of this regime is Bakrie who is in the cabinet,” he says.

In 2007 the Bakrie Group topped Indonesia’s rich list with a net worth of $5.4bn. Since then the global recession has hit them heavily.

Bakrie refused to be interviewed but has said previously that he has not taken part in business since becoming a minister.

But the $560 million which Lapindo says it has paid out so far is small change compared to the $3.5bn in damage and loss which Indonesia’s national audit office calculated Lusi has cost.

Yet Lapindo has continued to have success in the courts. In May 2009 Taufik and the Indonesia Legal Aid Foundation heard from the Supreme Court that their second appeal has been rejected.

Basari says remains defiant however, and says he will never give up seeking justice.

“It is not the end of the advocacy because from many other aspects we can show more evidences… Like legal campaign, political movement and anything, so, still, there are many ways.”

In the meantime, the human and economic costs of Volcano Lusi continue to grow and the Mudflow Mitigation Agency has resorted to pumping the mud into the nearby Porong River, creating a new mud island in its delta and, according to local fishermen, ruining their catch.

“The worst-case scenario is that this mud volcano carries on for decades,” Davies says. “The subsidence carries on at similar rates and that rivers start to be diverted, that actually it has a greater impact on the environment than perhaps we can envisage at this point.”

Until a thorough and independent investigation into the causes of Lusi is carried out unanswered questions will remain – and for the victims of Volcano Lusi, it will continue to be a case of muddy justice. 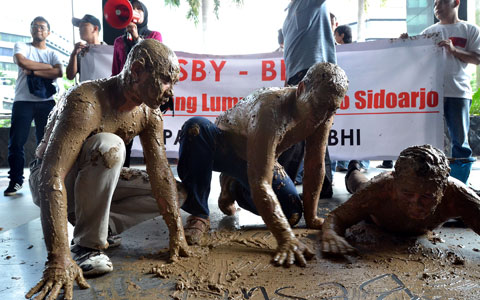 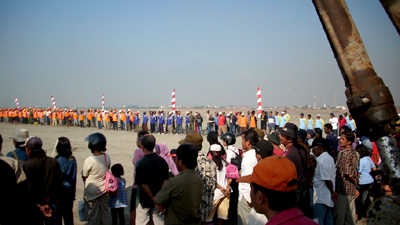