People have their own ways of expressing what they feel. Fifty children displaced by the Lapindo mudflow disaster in Sidoarjo did so by writing letters to the moon in an event held in Batu city earlier this month.

Together with 50 other children from Wukir village, Torong Rejo subdistrict, Junrejo district, Batu City, and 10 street children from Malang municipality, they wrote letters on pieces of paper and attached them to threads hanging from a balloon made of paper.

Then they floated them into sky, symbolically sending all the letters to the moon.

“I told the moon that residents of Porong badly need help because of the Lapindo mudflow,” said Abdul Amin, 10, from Besuki subdistrict, Porong district, Sidoarjo.

“I lost my home, my school and my friends.”

The program was organized by a group concerned with the welfare of Lapindo mudflow child victims. The 50 invited children from Sidoarjo came from three subdistricts affected by the disaster that broke out in 2006.

Apart from providing various games and play for the participating children, the organizers also required them to express anything they wanted to say in letters to be sent to the moon. Most wrote complaints and expressed hope for a better future after being displaced.

“Basically we want to give them back their space and time to play, which have been taken away by the disaster,” said Aga Herman, an initiator of the program.

“We want to show them they still have a place to play and friends to play with.”

Jumaadi, another program initiator, said writing letters to the moon was a symbol of children loosing space, time and friend.

“They don’t know who to talk to. They only have the moon,” he told The Jakarta Post on the sidelines of the event.

“The moon is the witness when these children played at night, when their villages were still there,” added Jumaadi, an artist originally from Sidoarjo, but presently residing in Australia.

He added he would take the documentation from the event back to Australia to show to several concerned institutions there, as well as to Europe as a form of moral campaign.

Aga also said that apart from providing mudflow children with opportunities to have fun, the event was also aimed at teaching the children from Wukir village how to show empathy and express solidarity for fellow children from other regions experiencing hard times.

He added the playing activities involving children from different places was also aimed at reminding people to spare space and time for children to play, because playing was also part of their lives.

Held on top of a hill, the program offered various experiences and games for the children.

Among the activities included playing with mud in rice paddies. This was specially designed to help reduce the trauma among mudflow victims, to show that not all mud was bad: mud could also be fun.

Bambang Catur Nusantara, head of the Indonesian Forum for the Environment’s (Walhi) East Java branch, said the 18 serious human rights violation in the Lapindo mudflow case included the loss of the human rights of children victimized by the tragedy.

The National Commission on Human Rights has also established an investigation team to probe rights violations in the disaster.

“The oil and gas sector never provide justice for these people,” Bambang said, referring to Lapindo Brantas Inc., the company widely blamed for sparking the disaster.

“They always become victims. Lapindo is just an example.”

He suggested that victims of rights violations stemming from the oil and gas sector unite to fight for their rights.

He said greater consolidation was the only way out for them, because it would put strong pressure on the authorities.

“If it cannot help, then sending letters to the moon could probably help create justice for the grass roots,” he said.[Wahyoe Boediwardhana] 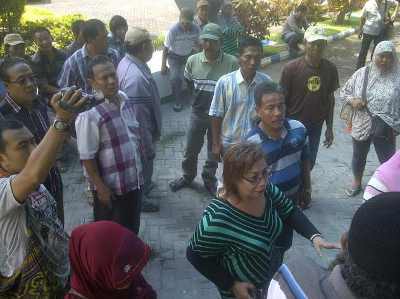 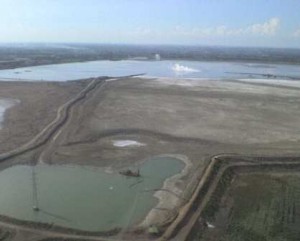