…while the makers of “Mud Max” said the film was made to offer viewers the facts with which to make their own assessments, not everyone believes the documentary is balanced and some have accused the creators of using funding from Lapindo.

In the time it takes you to read this sentence, the unending mudflow in Sidoarjo, East Java, will have spewed out approximately another 12,000 liters of scalding hot sludge and enough mud will have accumulated to swallow the home of yet another Indonesian family.

For nearly four years now the Sidoarjo mudflow has smothered more than a dozen villages. The homes, factories and farms of local residents have disappeared.

As a result of the mud volcano, nearly 60,000 residents have been left homeless and 100,000 people have been left displaced since the mud started flowing on May 29, 2006.

Also known as Lusi (an contraction of lumpur Sidoarjo , or Sidoarjo mud), the disaster has inflicted almost $5 billion worth of damage, according to one estimate by an Australian expert. And with 70 million liters of mud still pouring out daily the mud flow shows no signs of abating. Fourteen people were killed when a natural gas pipeline under one of the holding dams ruptured.

Dams have been built, along with levees and drainage ditches, while efforts have been made to plug the hole with concrete, but to no avail. So many investigations have been conducted to establish the cause of the mud volcano’s eruption — earthquake or industrial drilling — and the issue of blame has been so hotly contested that the mudflow is clouded in confusion, claim and counterclaim.

PT Lapindo Brantas, an oil and gas company, was drilling a gas exploration well 200 meters from the eruption site when it began. The company is owned by leading businessman and former cabinet minister Aburizal Bakrie, the current chairman of the Golkar Party.

Lapindo has been vociferous in denying that its drilling was the cause, although a weight of scientific investigation has failed to put forth few credible alternative explanations. Some scientists, however, have pointed to a 6.2-magnitude earthquake 280 kilometers away, near Yogyakarta, two days before the flow began.

The film received a brief flurry of publicity toward the end of last year when it had a premiere in the United States, but it is now set to reach a wider and much more concerned audience following its Asia-Pacific premiere on Feb. 13 at the Museum of Contemporary Art in Sydney.

Filmed over two and a half years by Immodicus SA in conjunction with the Arizona State University School of Earth and Space Exploration, the nearly 50-minute documentary examines the eruption of the mud volcano and the economic, social and political fallout left in its wake. “We started research in August 2007 and contacted people who were involved, [representatives of] Lapindo and also expert witnesses, and from them we got references of who to contact,” said Ismutia Rahmi, the associate producer and researcher.

Director Gary Hayes said the documentary aimed to cover the facts and views from all sides and ultimately allow viewers to decide for themselves what caused the mudflow.

On one side of the debate stands a team led by Richard Davies at Britain’s Durham University. In early 2007, Davies and others suggested that Lapindo may have been at fault. Research continued, and earlier this month they released a new report containing evidence pointing the finger at human error in drilling procedures as the trigger for the mudflow, with Davies saying he was now 99 percent certain the devastation was man-made.

One the other side of the argument is a team led by Adriano Mazzini, from the University of Oslo in Norway, which believes the disaster was probably due to the Yogyakarta earthquake. “I have a very open mind that the drilling may have done something, but there’s no geological evidence for that,” he said. “The solid evidence indicates an earthquake.”

The executive producer of “Mud Max,” Chris Fong, agreed that the cause remained a mystery, but said he believed the “small group” of people who blame Lapindo Brantas received a lot of publicity.

“They really don’t know what the cause is, they just made assumptions,” he said. “We talked to a lot of scientists about this, we looked at the drilling procedures and we don’t think [Lapindo] did anything wrong.”

While the courts currently agree with him — last year the Supreme Court decided that the mudflow was caused naturally — East Java Police recently said that reopening the case was a possibility in light of the new evidence from the Durham University research, which was published long after “Mud Max” had been released.

Fong said the idea for “Mud Max” was inspired by a report he worked on for a financial institution in early 2007, trying to ascertain the cause. “We did that report and it was interesting because it didn’t establish what the cause was,” Fong said during a news conference before the screening. “But we were led to believe by the media around the world and in Indonesia that it was because of human error in the drilling.”

In producing “Mud Max,” researchers sought out geologists, drilling experts and scientists who had investigated the disaster. Representatives from government and nongovernmental institutions as well as victims also have their say.

It begins with Indonesia’s history of volcanic activity, including the 1815 eruption of Mount Tambora on Sumbawa Island in West Nusa Tenggara that claimed 70,000 lives and caused “the year without summer,” and the eruption of Krakatoa 70 years later that killed almost 40,000 people and cooled temperatures around the globe for years.

But while the makers of “Mud Max” said the film was made to offer viewers the facts with which to make their own assessments, not everyone believes the documentary is balanced and some have accused the creators of using funding from Lapindo.

The makers strenuously deny this.

“It’s my own money,” Fong said in a panel discussion after the Sydney screening. “Let’s deal with this as a disaster and manage it properly. The issue of who caused this — whether it was caused by the company or is natural — is not going anywhere.”

Director Gary Hayes echoed these sentiments to the Jakarta Globe. “We weren’t hired by anybody,” he said. “It’s such a tragic event that happened and I thought somebody had to cover it.”

Scheduled for release in Indonesia sometime this year, “Mud Max” will challenge viewers to struggle with questions that have continued to go unanswered since May 2006.

For Davies, though, questions have been superseded by his latest research, which he feels is the strongest evidence to date of a link between the drilling and the mudflow.

“There can be no doubt at all that it was physically impossible for the earthquake to cause this mud volcano,” he said in an interview with British newspaper The Observer. “The disaster was caused by pulling the drill bit out of the hole while the hole was unstable. It’s like pulling up a bicycle pump, it acts like a plunger, sucking the water and gas from the surrounding rock in a way that could not be controlled.” 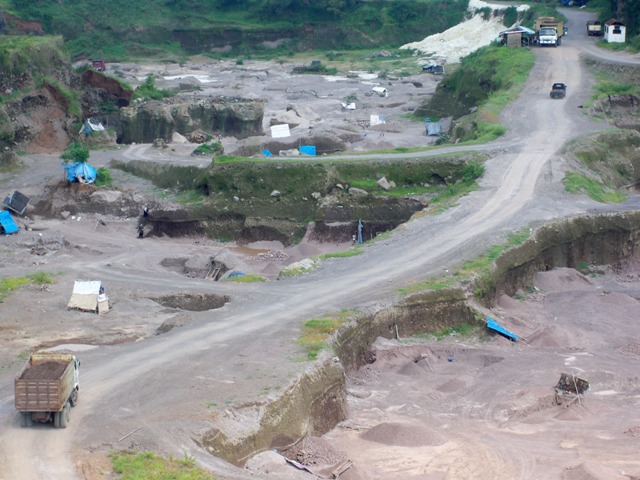 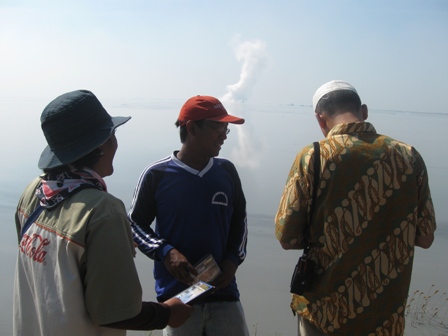