BERKELEY — New data provide the strongest evidence to date that the world’s biggest mud volcano, which killed 13 people in 2006 and so far has displaced 30,000 people in East Java, Indonesia, was not caused by an earthquake, according to an international scientific team that includes researchers from Durham University and the University of California, Berkeley.

Drilling firm Lapindo Brantas has denied that a nearby gas exploration well was the trigger for the volcano, instead blaming an earthquake that occurred 280 kilometers (174 miles) away. The firm backed up its claims in an article, accepted this week for publication in the journal Marine and Petroleum Geology, by lead author Nurrochmat Sawolo, senior drilling adviser for Lapindo Brantas, and colleagues.

In response, a group of scientists from the United Kingdom, United States, Australia and Indonesia led by Richard Davies, director of the Durham Energy Institute, has written a discussion paper in which it refutes the main arguments made by Sawolo and documents new data that provides the strongest evidence to date of a link between the well and the volcano. That paper has been accepted for publication in the same journal.

“The disaster was caused by pulling the drill string and drill bit out of the hole while the hole was unstable,” Davies said. “This triggered a very large ‘kick’ in the well, where there is a large influx of water and gas from surrounding rock formations that could not be controlled.

“We found that one of the on-site daily drilling reports states that Lapindo Brantas pumped heavy drilling mud into the well to try to stop the mud volcano. This was partially successful and the eruption of the mud volcano slowed down. The fact that the eruption slowed provides the first conclusive evidence that the bore hole was connected to the volcano at the time of eruption.”

The volcano, named Lusi, which first erupted on May 29, 2006, in the Porong sub-district of Sidoarjo, close to the Indonesian city of Surabaya, East Java, now covers seven square kilometers – nearly three square miles – and is 20 meters (65 feet) thick. The ongoing mud flow has razed four villages and 25 factories. The 13 deaths in 2006 resulted from a rupture in a natural gas pipeline underneath one of the holding dams. The Lusi crater has been oozing enough mud to fill 50 Olympic-size swimming pools every day. All efforts to stem the mud flow have failed, including the construction of dams, levees, drainage channels, and even plugging the crater with concrete balls. Lusi may continue to erupt for decades, scientists believe.

Arguments over the causes of the Lusi volcano have stalled the establishment of liability for the disaster and delayed compensation to thousands of people affected by the mud. The Yogyakarta earthquake that occurred at the time of the volcano was cited by some as a possible cause of the eruption, but the research team rejected this explanation.

The Durham University-led group of scientists believes that its analysis resolves the cause beyond all reasonable doubt. According to its discussion paper, “The pumping of heavy mud caused a reduction in the rate of flow to the surface. The reason for pumping the mud was to stop the flow by increasing the pressure exerted by the mud column in the well and slowing the rate of flux of fluid from surrounding formations.”

“An earthquake trigger can be ruled out because the earthquake was too small given its distance, and the stresses produced by the earthquake were minute – smaller than those created by tides and weather,” said co-author Michael Manga, professor of earth and planetary science at UC Berkeley.

The group of scientists has identified five critical drilling errors as the causes of the Lusi mud volcano eruption:

“This is the clearest evidence uncovered so far that the Lusi mud volcano was triggered by drilling,” Davies said. “We have detailed data collected over two years that show the events that led to the creation of the Lusi volcano.”

“The observation that pumping mud into the hole caused a reduction in eruption rate indicates a direct link between the wellbore and the eruption,” he added. “The decision was made to pull the drill bit out of the hole without verifying that a stable mud column was in place, and it was done while severe circulating mud losses were in progress. This procedure caused the kick.” * 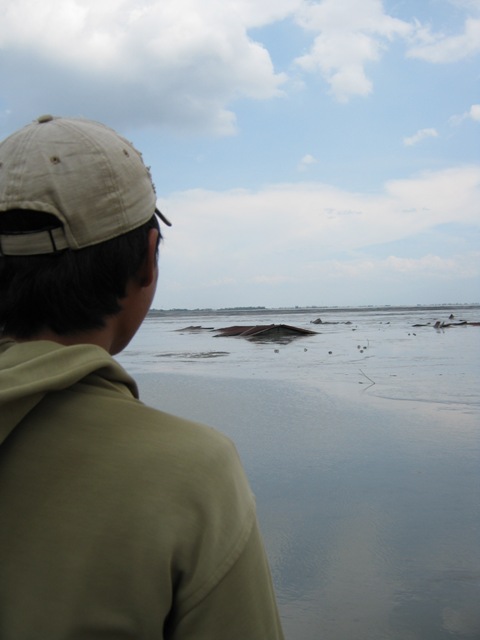