Please see these numbers, Rp 33.2 trillion; Rp 27.4 trillion, and Rp 32.8 trillion. Well, unusually large, isn’t it? And those numbers are not the losses suffered by investors due to the fuss collapse of world stock markets recently. These numbers are estimated for economic losses caused by Lapindo mudflow disaster in Sidoarjo.

The mind-boggling figures above were published by Greenomics, the National Development Planning Agency (Bappenas) and the State Audit Bureau (BPK) after studies into the economic impacts of the disaster.

In a similar tone, the economist Kresnayana Yahya has estimated that each day as much as Rp 300 million (AUD$36,000) fails to enter the economy due to ruptured infrastructure that has brought much of the transportation in the area to a standstill.

So how is it possible that a mudflow, which is lightly passed off by some officials as a passing, local annoyance to just the people of the Porong region and which has only inundated less than 2 percent of Sidoarjo District, could cause such enormous financial losses?

Because the mudflow has not only inundated villages in the Porong region but has also covered the toll-road and essential infrastructure (electricity, gas, telephone cables, water supply) as well as blocking the principal transportation artery in East Java which connects Surabaya, a hub of national and international trade, with regional cities.

Not included in the estimates above are the potential losses resulting from the significant decline in the business sector of East Java due to the mud disaster. Some examples are the property sector in the Sidoarjo region, tourism in Pasuruan and Malang and several industrial centres near Pasuruan and Mojokerto which have had to relocate.

But this time we don’t intend to discuss the large-scale economic impacts of the mud disaster. What we are going to examine here are the economic damages suffered by the victims and small businesses as a result of the Lapindo mudflow.

Here Comes the Mud, There Goes the Economy

As a satellite of Surabaya, the second largest city in Indonesia, Sidoarjo District is a region with a prosperous economy where a range of small scale economic activities have quickly flourished including in the region affected by the mudflow.

The economic damage in the area already covered by the mudflow, which now covers 824 hectares, can be divided into personal and business losses.

1.  Personal economic damages suffered by the population of the affected area include the loss of assets such as land and buildings as well as workplaces. The workplaces lost can be subdivided between the formal and informal sectors. The formal sector includes factories that have been inundated with mud, business owners and their staff and small scale producers who fill orders from outside the region.

The informal sector includes, for example, artisans, design shops, traders at the local markets, local food stalls, ojeks (motorbike ‘taxis’), pedicabs (three-wheeled bicycle ‘taxis’), small boarding houses that provided accommodation for workers in the region’s factories and many other types of businesses. Loss of employment has been the result of  the  loss of hundreds of hectares of farm land for wet and dry rice agriculture as well as aquaculture, which previously employed a large number of people in the region.

2. Besides residential areas, the mud covered 28 businesses which had employed 2,935 people. Some of the workers came from nearby villages now inundated with mud, but most  came from other parts of Sidoarjo District and even other Districts in East Java. Most of the businesses have not been able to operate since the mudflow began nor have they yet been able to relocate due to the slow processing of the business to business (B2B) compensation scheme.

Dozens of villages in the immediate vicinity of the affected area have also suffered serious economic losses. The loss of transport and irrigation networks along with the ever-widening mudflow area, have significantly damaged the economy of surrounding villages.

It has been estimated that up to 792 ha of farmland can no longer be put to use due to extensive damage to the irrigation systems of the area. Thousands of hectares of fish and shrimp farms have been directly affected by a decrease in water qualityas a result of the mudflow. In addition, regions isolated by the mudflow whereroad access is no longer possible, have also seen a decline in economic activities.

Other economic impacts have been felt in small-scale business activities in the surrounding area. Some examples are the bag and leather industry centre at Tanggulangin, small businesses at the Gempol Tollway exit, sand extraction along the Porong River and the embroidery centre of Bangil Subdistrict in Pasuruan District.

The leather industry of Tanggulangin is famous for producing bags and other leather products like wallets, belts and jackets. Before the mudflow, there were as many as 852 craftsmen working in the industry and more than 200 showrooms. Products were sold as far afield as Bali and Eastern Indonesia, but since the mud disaster the number of craftsmen working in the industry has been slashed by as many as 60-80 percent.

Small businesses around the Gempol Tollway exit formerly thrived on the tens of thousands of vehicals passing by. A variety of businesses including food stalls, souvenir and handicraft shops were operated by people who came not just from the local area, but from throughout East Java. Only 20 to 30 percent of these small businesses remain of the 200 to 300 that operated before the mud disaster.

Traditional sand extraction of the Porong River sediments formerly supplied the building industry and thousands of people worked along the length of the river. However, the extraction has stopped completely due to the thick mud sediments which have made it impossible to continue.

The centre of embroidery in Bangil Subdistrict was famous for its products which included clothing for Muslim women. However, since the main transportation route to Surabaya was severed by the mudflow, leading to an increase in costs and, sale price, while slowing deliveries, the primary market in Surabaya is no longer attracted to purchasing their products. The Association of Embroidery Artisans (Aspendir) Bangil, which represents 110 artisans, has suffered a decline in sales of as much as 75 percent and only 60 percent of artisans are still operating.

Two and a half years of the mudflow has seen the collapse of many small businesses. Its victims are not only those whose homes have been inundated, but also those who live in the vicinity.

While Lapindo and the government focus on containment of the mudflow and compensation for lost assets, the damage to the small businesses described here has been ignored. With the national and global economies currently under significant strain, the reconstruction effort, which depends to a large extent on the independent businesspeople of the region, will be increasingly difficult. [win] 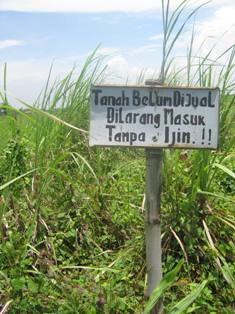