Hundreds of people affected by the Lapindo mudflow in Sidoarjo, East Java, have yet to receive compensation seven years after the disaster.

The victims have staged rallies to demand payment for the loss of their assets, swallowed by the mud from a drilling well. They erected an ogoh-ogoh (papier mache effigy) with the face of Aburizal Bakrie, the owner of PT Lapindo Brantas, and placed it at a section of the wall of a pool containing the mudflow in Porong, Sidoarjo.

Coordinator of the seventh anniversary of the Lapindo mudflow, Abdul Rokhim, said an ogoh-ogoh was usually used by the Balinese Hindus to dispel bad luck.

Rokhim said the effigy of Aburizal, chairman of the Golkar Party, was a symbol of who should be responsible for the disaster.

“The two-meter effigy was paraded and then placed by the containment pool to express residents’ frustration over the disaster,” he said.

He added that affected residents were using the seventh anniversary to emphasize that the Bakrie family had to be responsible for their sufferings.

PT Lapindo Brantas is controlled by the Bakrie family. The firm partly owns PT Minarak Lapindo Jaya (MLJ) which conducted gas exploration activities in the affected area leading to a blowout at one of Lapindo’s natural gas wells.

Lapindo has persistently denied its exploration activity was the cause of the mudflow, instead blaming an earthquake in Yogyakarta, hundreds of kilometers to the west.

Rokhim said residents also erected another effigy, a jaelangkung (summoning a ghost) wearing a political party T-shirt to mock politicians who turn the Lapindo case into a political issue ahead of the 2014 general elections.

One of the victims, Koestiari, 52, said Lapindo has yet to pay any compensation, as promised.

“I have spent all my savings and other wealth while many of my neighbors are stressed,” she said, adding that she no longer believed the government and Lapindo due to their empty promises since 2011.

Early this year, it was reported that Lapindo had paid Rp 3 trillion (US$ 306 million) in compensation to the mudflow victims.

Separately, East Java Governor Soekarwo said the government could do nothing to expedite the payment by Lapindo because the Supreme Court had issued a ruling saying that it was not Lapindo’s fault.

“PT MLJ’s responsibility is merely based on compassion because the Supreme Court has ruled that the company was not at fault,” he said.

“However, the company has promised to pay all the compensation in November. The state cannot force it to do so.” 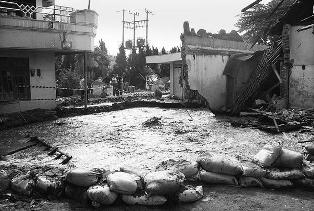 Indonesia at the Crossroads (Sigh) Again