TEMPO.CO, Jakarta – Last May 29, a newly erected monument has stands on top of the mudflow embankment at point 21 with words engraved saying, “The Lapindo mud flow has buried our village and all Lapindo has done is throw around fake promises. The nation has neglected to recover our lives; our voices will never fade, so the nation will never forget.”

The monument was built to commemorate seven years since the Lapindo mud flow tragedy occurred at the Lapindo Brantas Inc site in Sidoarjo District, East Java. Since May 29 2006 until this moment, mud continues to burst and submerge 641 hectares of land in six villages in three sub-districts.

“This monument is so Lapindo victims will always remember to demand a full recovery of their well being that was swallowed by the mud,” said Director of the East Java Indonesian Forum for the Environment (Walhi), Bambang Catur Nusantara.

Residents who still live near the pool of mud are still on alert because mud and gas continue to discharge. A number of homes are damaged in addition to the polluted well. More regions suffer due to this catastrophe.

Amien Widodo, a geologist from the 10 Nopember Technology Institute in Surabaya used dough as an analogy for the Lapindo mud. There is a hole in the center with its surroundings melting due to excess of water. “The whole in the middle then pulls down its surroundings to the center of the discharge area causing the land around it to decline,” he said last Thursday. 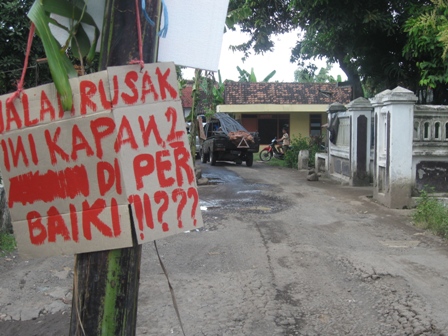