It is astonishing in size. The mud stretches as far as the eye can see and it still has steam billowing out from the middle of it. We are in Surabaya in the East of Java, Indonesia, where we have travelled with JATAM (the Indonesian anti-mining network) to the site of the ‘Lapindo mud flow.’

The mud flow gets its name from ‘Lapindo Brantas,’ the company responsible for the disaster. In 2006, Lapindo caused a gas-well blowout, which triggered the mud flow. It has swallowed 22 villages and displaced thousands of people, many of whom have only received a small proportion of the compensation that they are due. Some of the companies involved with the disaster have received funding from the UK finance sector.

29 May is JATAM’s National Day of Action on Mining, marked by a protest moving from Sidoarjo’s town square to the mud flow.  For people at the protest the mud flow is a symbol of of the devastation that can be caused by the extractive industries.

Marsudiyono and his daughter Yora

As we stand next to the mud flow and look at how it is engulfing the entire landscape around us, we are greeted by Marsudiyono and his daughter Yora. He points at the lake of mud and says to me “my house used to be there”.
He continues,

“I lived in the village of Siring, which has been totally destroyed. I was given 20 per cent of my compensation as a down payment, but I’ve received nothing else since. I used to go to work in Bali but I have lost my job – because if I leave the area, there is no way I will get the rest of my compensation. My daughter lost touch with most of her friends because we had to move to a different village and live with her grandparents. Before we lived with them, we were forced to live in a camp.”

Later Yora tells us that, “one day I went to school and when I returned, our house was gone.” 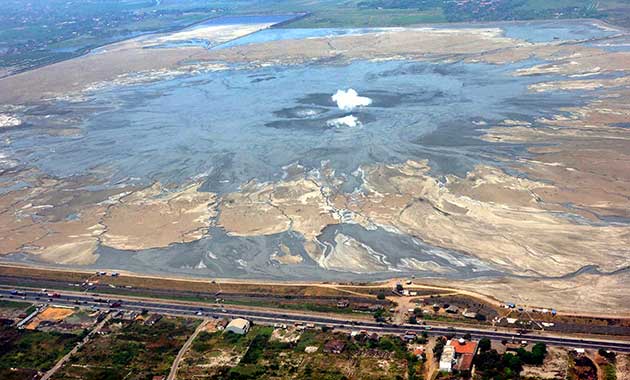