Imagine coming from school to find your house submerged in grey mud and your community destroyed forever.

This is what happened to Yora, a young girl from the village of Siring in eastern Java, Indonesia and her father Marsudiyono. They were among the many victims of the Sidoarjo mud volcano, the biggest in the world, which erupted in May 2006. The eruption was caused by the fracking activities of Lapindo Brantas, a company set up by two big Indonesian companies and Australian oil firm Santos to extract natural gas from beneath the town of Sidoarjo.

Yora clearly recalls the terrible events of that spring, which forced her father to give up his job in Bali and fight for compensation for his family’s losses.

‘I did not hear anything at the time. There was a bad smell but none of us knew that it was coming from Lapindo… one day I went to school in the morning and came back to find my house had been submerged in mud. Now I have lost many of my friends because everyone was forced to move away.’

Seven years on, Yora, Marsudiyono and the people of the 22 villages submerged under a thick layer of mud are still paying the price of the extractive industry’s irresponsibility. Most of them are still waiting for compensation – Marsudiyono has received just 20 per cent of what he is legally entitled to.

The tragedy of Sidoarjo is just one of the many examples of how fossil fuel industries are devastating the lives of communities across Indonesia. Foreign investment from companies like British-listed BHP Billiton is pouring into the country as the government has given out over 11,000 permits for mining companies to develop land and virgin rainforests upon which local people depend.

But there is some hope to be had amongst the destroyed houses and lunar wasteland of Sidoarjo district. There, as in many places across Indonesia, local communities are resisting the onslaught of extractive firms and refusing to give up the fight for justice.

Indonesian activists have declared 29 May as national anti-mining day. For 2013 I was invited by the Indonesian mining advocacy network JATAM to join the local people of Sidoarjo to mark the seventh anniversary of the volcano’s eruption.

I was treated to a spectacle that demonstrated the strength of resolve among local people to defeat the interests of the massive foreign companies and local businessmen responsible for the tragedy. As we stood at the edge of the sea of grey mud stretching out past the horizon, protestors deposited a huge effigy of the Indonesian tycoon behind Lapindo Brantas, Aburizal Bakrie, into the mud while others erected a gravestone to commemorate the loss of the villages.

Despite the seven long years of waiting, people like Marsudiyono and Yora still retain hope that they will prevail. But unless the companies involved and their foreign backers are held to account, disasters like Sidoarjo are likely to be repeated.

Fossil fuel extractives projects are causing devastation to millions across the world who are being forced to lose their homes and livelihoods as a result of the pollution and land grabs these projects inevitably entail. As we approach the point of no return on climate change, many more will be affected more indirectly by the billions of tonnes of carbon these projects emit.

Many of the firms engaging in fossil fuel extraction in Indonesia, such as BHP Billiton and Bumi plc, are listed in Britain and receive considerable financial backing from British investors, banks and pension funds. And Indonesia is not alone – Britain’s finance sector is a major bankroller of fossil fuels across the world. To stop the devastation wrought by these industries, we need to stem the flow of finance they receive.

The London Mining Network released a report last year calling for greater regulation of firms listing on the London Stock Exchange [pdf], to ensure that they adhere to social and environmental standards. Others, including the World Development Movement, have called for banks to be forced to disclose the carbon footprints of their investments in fossil fuel extractives.

These measures, alongside divestment campaigns such as 350.org, are a first step towards stopping money getting to coal, oil and gas extraction in Indonesia and elsewhere. But we need more radical action and more cooperation between activists in Britain and their allies in the Global South to be able to win justice for the victims of the fossil fuel rush and ultimately put stop to the financial sector’s high carbon investment binge. 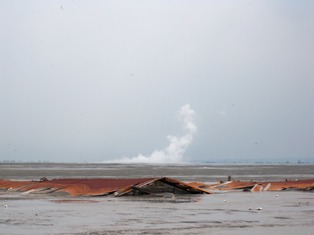