Published in the journal Nature Geoscience, the study strengthens the argument by gas company PT Lapindo Brantas that the disaster was caused by a distant earthquake, not by its drilling crew as some experts contend.

Lusi, located in the Sidoarjo district of the island of Java, erupted on May 29, 2006 in the middle of a rice field.

It has destroyed 13 villages, dozens of factories and shops and a highway, prompting the government to build dykes 10 metres (33 feet) high to try to contain its spread. Nearly 50,000 people were displaced.

The new research, by a team led by Stephen Miller at the University of Bonn in Germany, suggests the eruption was caused by the 6.3-magnitude earthquake that occurred two days earlier near Yogyakarta.

“We conclude that the Lusi mud eruption was a natural occurrence,” they write.

Even though the two events were some 250 kilometres (125 miles) apart, the rock formation at Sidoarjo has a shape and structure that acted rather like a lens, amplifying and focussing the wave of seismic energy from Yogyakarta, according to their computer model.

The jolt of energy would have liquefied the source of the mud, causing it to be injected into a fault connected with a deep hydrothermal system. This superheated blowout feeds the eruption today, goes their theory.

Asked to comment on the study, British geologist Richard Davies pointed to the daily drilling reports from the Lapindo Brantas team at Sidoarjo.

It showed their gas exploration was going awry, Davies said.

On the day of the eruption, the drillers acknowledged that they were having problems in stabilising pressure in the hole, a routine procedure that uses injected fluids, as they sought to withdrew their drill bit, he said.

That, and the lack of protective casing around the hole, “was like pulling the cork out of a champagne bottle,” causing a “kick” of high-pressure mud to blow from the hole, Davies, a professor at Durham University, told AFP in a phone interview.

“They’ve come up with an elaborate geophysical model but I think they’ve ignored the more obvious data,” said Davies said.

Seismologists have widely, but not unanimously, sided with his explanation. Some note that much larger earthquakes had previously occurred closer to Sidoarjo yet not caused any mud volcano.

This is roughly equivalent to between six and eight Olympic-sized swimming pools of muck per day.

Amein Widodo, a geologist from the Sepuluh Nopember Institute of Technology in nearby Surabaya city, said it was impossible to predict how long the volcano would keep erupting. “The amount of mud has reduced a lot, but having seen other cases in Java, it’s possible it could erupt for more than 100 years,” said Widodo.

All victims have received some compensation, some of them from the government and others from Lapindo Brantas, despite its claim of no wrongdoing. The company is part of a business empire controlled by Indonesia’s powerful Bakrie family.

Around 5,000 people are still waiting for full payment. 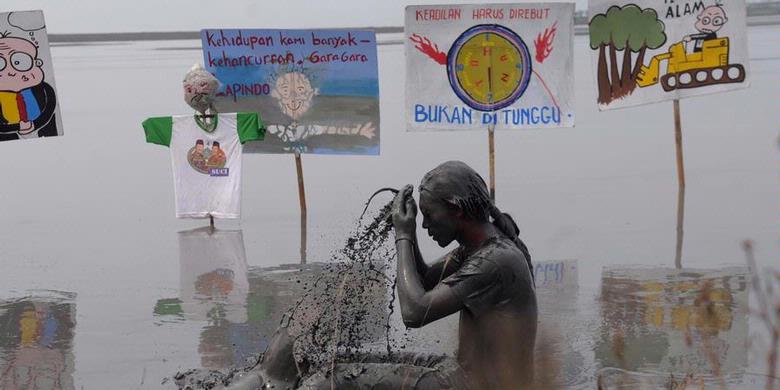