A fresh study of the Lusi mud volcanoes in East Java, which began erupting in May 2006, concludes that the disaster was caused by a natural phenomenon, but has been met with widespread public scepticism in Indonesia, with one prominent local geologist questioning its validity.

According to the study, published in Nature Geoscience on 21 July, the mud eruption was caused by seismic waves that travelled from Yogyakarta earthquake in Java, Indonesia, two days prior to the eruption.

But careless gas drilling has also been blamed for the mudflow that continues to spew boiling mud, inundating 13 villages and displacing over 30,000 residents. Some experts believe it will continue to erupt for decades.

The study’s authors used computer simulation to see how seismic waves from the Yogyakarta earthquake interacted with rock formations in Lusi. The specific shape of these rock formations can reflect and amplify the waves.

“This amplified energy then focused into the mud layer which liquefied the mud,” says Stephen Miller, of the University of Bonn in Germany, who coordinated the study. The liquefied mud then seeped into a crack and erupted to the surface.

But Bagus Endar Bachtiar, an Indonesian geologist from Bandung Institute of Technology, Indonesia, who has been researching the Lusidisaster, dismissed the theory.

“It is impossible that Lusi was caused by a Yogyakarta seismic wave. If it is because of the rock formation below Lusi, why did the mud volcanoes only happen in Lusi? Why not anywhere else in between Yogyakarta and Lusi? All those areas have the same geological rock formation like Lusi. They should behave the same way. But they didn’t,” says Bagus.

Another geologist, Richard Davies from UK-based Durham University, believes the mud eruption was caused by drilling. Last year, a team of international scientists from France, Indonesia and Norway also blamed the disaster on drilling.

The case is a sensitive issue in Indonesia because the company behind the drilling, Lapindo Brantas Inc., has refused to accept responsibility for the disaster and to compensate victims. It is a majority-owned by a powerful politician, Abu Rizal Bakrie, who is seen as a possible presidential candidate.

Some Indonesians think Miller and his colleagues’ research is done to support Lapindo Brantas.

But Miller says the authors have no financial interest in the study’s results.

“I can understand their scepticism. But our interest is in the science and we have zero financial interest,” he says.

Rachel Twinn, a senior press officer for Nature Publishing Group, emphasises that Miller’s research passed the peer-review procedure and met all criteria for publication, such as providing strong evidence for its conclusion. 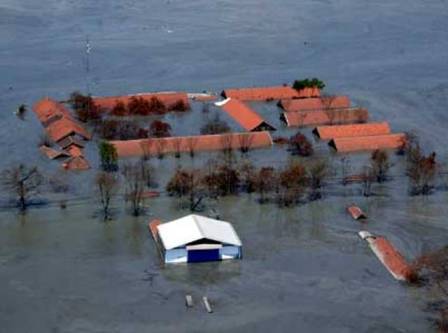