Despite the threat of overflowing hot mud that may engulf their house at any time, Suwandi, 75, and his wife, Saniakah, 70, insist on staying in Gempolsari village, Porong district, Sidoarjo regency, East Java.

They even remained indifferent to news that some embankment spots had been recently damaged.

“On Wednesday morning, a section of the embankment was damaged and the mudflow almost reached my house. I’ve lost count of the number of times damage has been caused to the embankment,” he told The Jakarta Post on Thursday.

Sidoarjo Mudflow Mitigation Agency (BPLS) spokeperson Dwinanto Hesti Prasetyo said there were dozens of vulnerable spots in the mud reservoir. They included spot No. 34, where the mudflow surface was only 50 centimeters lower than the top of the embankment, and spot No. 22, which was only 25 cm lower.

“Spot No. 21 is the riskiest because it is located by Jl. Raya Porong and the railway track. This is worrying because according to the BMKG [the Meteorology, Climatology and Geophysics Agency], we will enter the rainy season in October,” he said.

He explained that the embankment that surrounded the mudflow remained damaged because his agency could no longer channel the mud into the Porong River as it was prevented from doing so by the affected residents.

“Residents who have not yet received compensation have blocked BPLS workers from channeling the mud into the Porong River to ease the burden of the mud reservoir,” Dwinanto said.

Reno Kenongo subdistrict secretary Subakri said people had blocked the agency workers as they were dismayed by the government’s and PT Lapindo Brantas’ promises of compensation.

“We will continue our struggle by doing whatever is necessary to fight for our rights,” Subakri said.

On May 29, 2006, the lives of residents in Porong were changed forever following an eruption of a mudflow. The previously green area was turned into a huge, deserted expanse covered with dried mud.

The eruption took place near a drilling site belonging to Lapindo Brantas. This triggered speculation that Lapindo may have been negligent during its drilling process.

Lapindo, however, cited a number of scientists’ arguments that the mudflow was triggered by a 6.3 Richter scale earthquake that had hit Yogyakarta two days before the eruption took place.

A spokesperson of the joint secretariat of Lapindo mudflow victims, Khoirul Huda, said 3,200 of 13,200 documents proposed compensation worth Rp 780 billion (US$65.7 million) that had not yet been paid by PT Minarak Lapindo Jaya as the cashier of Lapindo Brantas.

Ahmad Khozin, another victim of the mudflow, said the victims were glad to learn that the Supreme Court had told the government to take responsibility for the payment of the compensation.

“Yet up until now, there’s been no clarity on this,” he said.

In frustration, he said the compensation had to be paid soon or all activities on the embankment must cease immediately.

Suwandi said if the mudflow did not exist, he and his wife would have been spending their old age peacefully by taking care of a chicken farm, but they had to forget that dream amid the mud-strewn landscape.

He said Lapindo Brantas had stopped supplying clean water to local residents in 2010. Since then, he had bought clean water for daily consumption.

“We just want justice from the government and Lapindo Brantas,” he said.

Indonesian Forum for the Environment (Walhi) East Java branch executive director Ony Mahardika warned that the government should consider giving attention to the residents’ health as the groundwater had been heavily contaminated with metal and polycyclic aromatic hydrocarbons (PAH) that had surpassed the normal level. 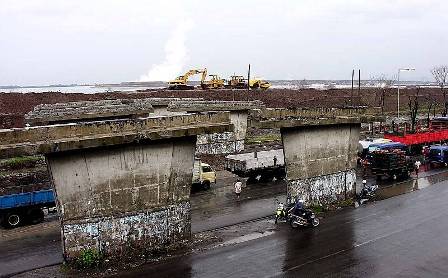 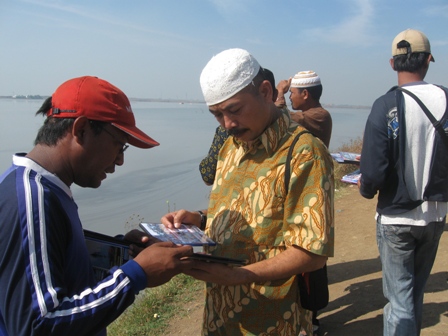 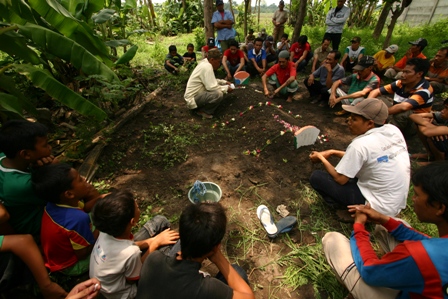