Golkar Party chairman Aburizal Bakrie easily won his reelection as party boss in Bali this week because of, among other reasons, his convincing assurance that  he would make local party leaders in 415 cities and regencies and 34 provinces across the country become mayors, regents or governors. They would not need to make any preparations or woo voters. Voters would be meaningless. His mantra was enticing: let us repeat what Soeharto did for the country!

During his 32-year rule, Soeharto’s Golkar completely controlled the country. Only Soeharto had the right to decide on regents, mayors and governors and on nearly all aspects of life in Indonesia. The glorious era of Soeharto and Golkar should be restored was the message in Bali. And Golkar is very close to the goal of reviving Soeharto’s heyday. Now, when party members want to get lucrative local government positions, they only need two things: Aburizal’s blessing and money!

How about Aburizal’s own future? The business tycoon — some of his companies are reportedly facing serious financial problems — aims to replace President Joko “Jokowi” Widodo in 2019. Aburizal expects it to be a very smooth win. Even when 150 million voters do not want him to lead the country, he can ignore them. In 2019, Aburizal believes, Golkar will fully control the country at all levels. It will be very easy for him to get full control of the country into his own hands.

Just ignore the Constitution, which mandates a direct presidential election. As the second-largest political party after the Indonesian Democratic Party of Struggle (PDI-P), Golkar, Aburizal firmly believes, will be the final arbiter in all political aspects of the country by means of indirect elections. There will be no more direct elections. Since 2005 Indonesian voters have had the right to directly elect their mayors, regents and governors. And since 2004, voters have had the right to choose their head of state and government. The Golkar-led Red-and-White Coalition rejects the people’s constitutional right.

Indonesians will be denied their right to determine the future of the nation. The coalition leaders apparently believe that God has entrusted Aburizal and the loser of the July presidential election, Prabowo Subianto, with the authority to abolish the direct-election system because it is too costly and too complicated for them (in their eyes, Indonesians are probably too stupid to practice democracy). Golkar under Aburizal’s leadership will take all necessary means to enforce the Law on Regional Elections. His success is almost guaranteed.

Shortly before ending his term of office in October, then president Susilo Bambang Yu-dhoyono issued a government regulation in lieu of law (Perppu) to annul the law that reinstated indirect local elections. To me, Yudhoyono is a traitor to our democracy. His Democratic Party fully supported the law. He became president for 10 years thanks to the direct-election system. He issued the Perppu simply because people were angry with his party’s support for the law. He is a great pretender; a genius soap opera actor.

The law was supported by Golkar, the Democrats, Gerindra, the Prosperous Justice Party (PKS), the National Mandate Party (PAN) and the United Development Party (PPP). The House of Representatives will decide the fate of the Perppu early next year and, Insya Allah (God willing) the Red-and-White Coalition believes, it will face no serious opposition to annulling the Perppu and restoring the indirect-election system.

Let me give a few examples. Next year the popular Surabaya Mayor Tri Rismaharini will end her first five-year term. She would easily win reelection under the direct-election system. But now chairman of Golkar’s Surabaya chapter Adies Kadir knows for sure he stands a great chance of taking over the mayor’s position simply with Aburizal’s consent and of course money. The money is needed to buy the votes of 50 members of Surabaya Legislative Council. It is much cheaper and easier for Adies because he does not need the votes of actual Surabaya citizens.  As long as the 50 legislators are happy with him, and as long as Aburizal likes him, Rismaharini can do nothing to beat him.

Jakarta Governor Basuki “Ahok” Tjahaja Purnama will end his term in 2017. From this point on Golkar chairman of Jakarta chapter Zainudin should accumulate his financial resources. Of course he must also make sure that Aburizal does not change his mind and pick another person to contest the 2017 gubernatorial election.

Isn’t it so very easy? Thanks to Soeharto, Aburizal believes that he will also be able to pursue his dream of becoming president. In public of course he must hide his ambition. From now on he just needs to concentrate on how to amend the Constitution and in 2019 there will be no more direct presidential elections. The People’s Consultative Assembly (MPR) will take over the voting right of Indonesians to elect their president. The MPR comprises the 560-member House and the 132-member Regional Representative Council.

Changing the Constitution apparently is just a technicality for Aburizal, as he pointed out in a recent interview with a national newspaper how an indirect presidential election was possible.

Aburizal only needs to find effective ways to eliminate his potential rivals, including Prabowo, in the 2019 (indirect) presidential election. With former Golkar chairman Akbar Tandjung as his chief advisor, it seems that Aburizal will not face any hurdles to realizing his promise and dream: indirect elections. The Jokowi camp, the Great Indonesia Coalition, is trying to weaken the Red-and-White Coalition. At least for a while, Aburizal and Prabowo are still in full control of the coalition. So, Soeharto’s complete return in 2019 is almost guaranteed.

The writer is senior managing editor of The Jakarta Post

Bakrie 2019: The return of Soeharto 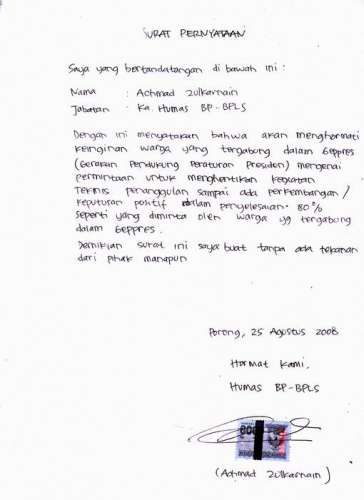