Vice President Jusuf Kalla affirmed on Wednesday that although the government planned to buy the assets of PT Minarak Lapindo Jaya, the company should still pay compensation to the victims of the mudflow.

“The government will buy the assets, not pay the compensation. It [the compensation] is still the responsibility of Lapindo because it is a civil case,” Kalla said on the sidelines of a ceremony to commemorate International Human Rights Day.

Earlier this year, the Constitutional Court issued a ruling ordering the government to force Lapindo to complete the payment of compensation to the victims of the disaster.

The company recently claimed that it still needed to pay around Rp 781 billion (US$63.26 million) of a required Rp 3.8 trillion in compensation to more than 4,000 victims who lived in the affected area.

Earlier this week, Public Works and Public Housing Minister Basuki Hadimuljono revealed the government’s plan to buy the assets of the company worth Rp 781 billion so that it could pay the long overdue compensation. (***) 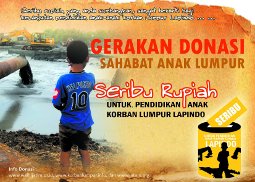