It’s been two years since the ground opened near Sidoarjo, Indonesia, spewing mud over the homes, farms, and businesses of tens of thousands of people. The disaster quickly acquired the rather endearing name of “Lusi”, which is short for “lumpur” (Indonesian for mud) and “Sidoarjo”. The two-year anniversary media bonanza has focused on the continuing plight of the refugees and the publication of a new paper analyzing GPS data around the mud volcano to determine that there is, indeed, going to be a big hole in the ground where the mud used to be. Chris Rowan has already blogged about that study, so I’ll not summarize it again here.

However, there’s another paper due out, this time in Earth and Planetary Science Letters, discussing the cause of the eruption. The initial eruption was suspiciously near to a gas exploration borehole … but it was also just three days after a magnitude 6.3 earthquake. “Could the earthquake have caused the eruption?” Hah. No. It was totally the exploration well.

We – and by “we” I mean Richard Davies (also an author on the study documenting the big hole in the ground), myself, Michael Manga, Rudi Rubiandini, and Richard Swarbrick – came to this conclusion through two main lines of argument. The first is something Michael pointed out in short a 2007 article in EOS: the earthquake in question was smaller and farther away than past earthquakes in that part of Indonesia. Compared to other earthquakes that have made mud do interesting things, it’s rinky-dink.

In the paper, we go on at length about the various ways in which the earthquake was utterly wimpy and unexceptional. I spent a good chunk of last summer estimating the amount of shaking it probably produced and the amount of stress it put on the crust near Lusi. No matter how you slice it, the “trigger” was smaller than anything you might expect to cause an eruption, and also smaller than a bunch of previous earthquakes that didn’t do anything.

Of course, you could still invoke weird, exotic, or handwavy mechanisms by which a run-of-the-mill earthquake could have triggered an eruption. But we found a much simpler explanation: Drilling mud.

Boreholes – especially deep boreholes – are almost always filled with mud. This helps keep the hole from caving in, and prevents other bad things from happening when the drill encounters highly pressurized water or oil. Drillers must constantly monitor and adjust the consistency of the mud to ensure that the mud doesn’t escape into the surrounding rock, and conversely, that the fluid in the surrounding rock doesn’t get into the hole.

The day before the eruption, water from the surrounding rock started flowing into the borehole. In the course of trying to control this, the drillers sealed the top of the hole – but they put a pressure meter inside. We calculated that the weight of the drilling mud, in addition to the pressure recorded at the top of the hole while it was sealed, was enough to muscle into the surrounding rock and force open fractures leading to an eruption.

We don’t say that PT Lapindo Brantas (the company operating the exploration well) should be blamed for the eruption. In order to throw around concepts of blame or liability, we would need to establish not only that the drilling caused the eruption, but that the drilling practices used – the decisions about whether or not to install steel casing in the borehole, or the actions taken to control the well during the days before the eruption – were somehow deficient.

Gentle readers, I ain’t touching that question with a ten-foot stand pipe. 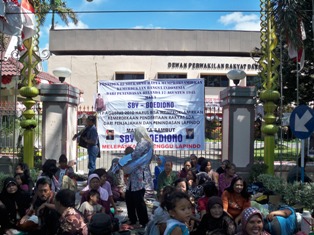 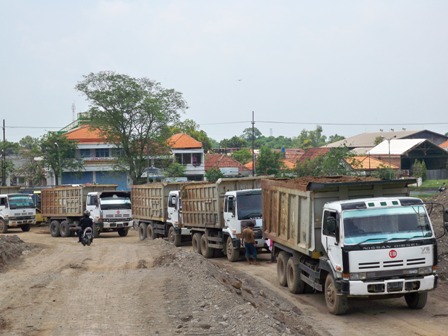