For Supardi, the recent Idul Fitri celebrations were vastly different to previous years as his village struggled to rebuild after a devastating mudflow struck in February this year.

As neighborhood head of Besuki village, Supardi and his fellow villagers celebrated Idul Fitri in emergency tents and makeshift houses after their homes and farmland were destroyed in the disaster.

For Supardi, the recent Idul Fitri celebrations were vastly different to previous years as his village struggled to rebuild after a devastating mudflow struck in February this year.

As neighborhood head of Besuki village, Supardi and his fellow villagers celebrated Idul Fitri in emergency tents and makeshift houses after their homes and farmland were destroyed in the disaster.

“We tried to celebrate Idul Fitri as we had in past years, but it’s not the same because we have been expelled from our own homes and deprived of our rights for fair compensation and humane treatment,” Supardi said.

Despite the poor conditions, Supardi said he was still positive because the disaster had drawn the community together in survival throughout the economic hardship.

Residents displayed their unity by agreeing to perform the Ied prayer at the damaged village mosque, and by greeting each other according to the Sillaturahmi Islamic family tradition.

Sillaturahmi is a tradition practiced every Idul Fitri where Muslim families go from door to door visiting their relatives and neighbors, asking for forgiveness by kissing and shaking hands.

“We used to take two to three days going on Sillaturahmi in our village, but this time it only took a couple of hours because we live right next to each other,” Supardi said.

Tears were shed at the Sillaturahmi ritual as residents shook hands and comforted each other, asking for pardon.

Mudflow and gas bubbles inundated Besuki and two other nearby villages, Pejarakan and Kedungcangkrin, earlier this year, rendering them uninhabitable.

Despite the presidential decree for compensation payment issued in August, residents are yet to receive any funding or humanitarian aid from the government. The major energy company held responsible for the disaster, Lapindo Brantas Inc., is also yet to distribute any compensation.

The disaster, which buried four villages and hundreds of hectares of farmland, was triggered by hot mud leaks from the company’s mining site since May 29, 2006.

Following the February nightmare, which submerged hundreds of homes, many people have left their temporary shelters to build huts on their damaged farmland in the village after having difficulties adjusting to their new environment and making money to survive the economic hardship.

“We have been living together for years, living separately in a new environment feels awkward,” Supardi added.

Now, the 250 Besuki residents have been living together in makeshift houses along the damaged Porong toll road and planned to stay there until the government or Lapindo pay for the compensation.

According to the 2008 presidential decree, the mudflow victims in Besuki, Pejarakan and Kedungcangkring villages are entitled to fair compensation from the state budget but so far they have received only a Rp 2.5 million in advance payment to allow them to rent a house for two years while waiting for their resettlement into nearby villages and the payment of the remaining 80 percent compensation.

“We don’t know the location of the new settlement designated for us yet, but what really matters for all of us is to be together again in one village and just try to start all over again,” Supardi said. 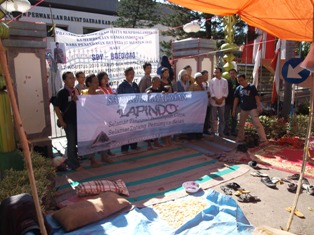