Friday, 10 October 2008, written by Our Correspondent

The Jakarta Stock Exchange remains closed after Bakrie Group companies are suspended from trading amid allegations of irregularities Indonesia’s billionaire Chief Welfare Minister Aburizal Bakrie, whose companies are already being held responsible for the biggest man-made environmental disaster in Indonesian history, is now in trouble for playing a major role in wrecking the country’s stock market, which has been closed for three days.

Indonesia’s billionaire Chief Welfare Minister Aburizal Bakrie, whose companies are already being held responsible for the biggest man-made environmental disaster in Indonesian history, is now in trouble for playing a major role in wrecking the country’s stock market, which has been closed for three days.

Six companies controlled by the powerful Bakrie Group were suspended from trading Tuesday on the Indonesia Stock Exchange in the wake of wild gyrations in prices that drove the group’s shares down by 30 percent.

The exchange has ordered a probe into trading of the shares, with traders and analysts openly saying the stocks had been manipulated to drive up their price. Lenders to the Bakrie Group, wary after being burnt the first time his empire collapsed after the 1997 Asian financial crisis, are believed to have sought his family companies’ stock as collateral. The stock comes with stringent conditions and bankers worry that some loan covenants may be triggered if the stock remains untradeable. The group has not disclosed what the conditions of group loans are.

Given Bakrie’s political clout and the fact that his companies have routinely escaped scrutiny by government officials, it is questionable how far the investigation will go. However, the disastrous blowout of a Bakrie-controlled gas well two years ago and the environmental damage it did, plus other problems, may have made him less than welcome in the cabinet of President Susilo Bambang Yudhoyono, who has made reducing corruption a major goal of his administration. The country’s indefatigable Corruption Eradication Commission has been arresting politicians right and left.

The exchange’s benchmark composite index plummeted more than 21 percent this week, the biggest three-day fall in 20 years as major foreign investors pulled back from emerging markets, and particularly those as dicey as Indonesia’s. The Jakarta Stock Exchange was Asia’s worst-performing market before exchange president Erry Firmansyah shut it Wednesday. There was hope that it would reopen on Friday, but Firmansyah told reporters it would remain closed to give investors a chance to “calm down before they make decisions.”

While suspicion has focused on the Bakrie-owned PT Bumi Resources Tbk, the country’s largest coal miner, it has also shone a spotlight on the Jakarta Stock Exchange as well, which has often been likened to a gaming casino rather than a rational market, with rampant insider trading and traders taking control of blocks of stock in so-called “pump and dump” pyramid selling games between them to drive up the price and draw in retail investors. A classic game is to drive up the price of a stock by selling it between each other until enough unsuspecting investors have been drawn in, then to sell and get out, watching the price drop precipitately.

PT Agis Tbk, a general trading and electronics company, is a case in point. In June of 2007, Agis was responsible for the collapse of the composite index when 20 brokerages defaulted on trades in the company’s shares worth Rp23 billion. Agis’s share price had risen from Rp300 to Rp4,000 in less than six months before plummeting.

Similarly, PT Bumi Resources was the focus of hyperactive trading during the runup in commodity prices earlier this year.

“Among these six companies under the Bakrie Group banner, Bumi Resources is the prima donna,” Sugianto, a market trader with BNI Securities, told local media. Sugianto noted that trading in Bumi Resources accounted for almost 30 percent of the movement in the index every month.

Although in June soaring coal prices pushed Bumi up to make it the largest capitalized company on the exchange, its shares have plunged 75 percent since hitting a record high of Rp8,750 on June 10.

Bayburs Alfaris, an independent market analyst, said trading in Bumi was dominated by so-called “market makers,” who are able to drive prices up or down. “It was the market makers who drove Bumi’s stock price on the exchange,” Alfaris said, calling the stock a “beautiful play” during its heyday.

Bumi was trading at Rp950 on January 2 before it began its exponential, almost ten-fold rise. Apart from the uptrend in commodity prices, Alfaris said, the increase in Bumi’s stock price helped it succeed in its bid to acquire Australia-listed Herald Resources Ltd.

Herald’s main asset is its 80 percent interest in the undeveloped Dairi lead and zinc mine, which is awaiting a permit before construction work can start. The Indonesian state-controlled nickel producer PT Aneka Tambang Tbk owns the other 20 percent.

Both Alfaris and Sugianto said they are suspicious about the trading in Bumi stock movements, although they caution that it appeared to have been done within market rules.

“What we see is that the market makers maintained the movement of prices within the range permitted by the market rules,” Alfaris said. “While it appeared to be real, in reality it was all artificial.”

“Bakrie Group stocks have always been the target of speculators,” Sugianto said. “They are very risky for serious investors.” He added that Bumi’s stock would likely fall further once trading resumed. “Margin calls will put additional pressure on Bumi’s stock price,” he said.

Alfaris noted persistent market reports that parent company PT Bakrie & Brothers had defaulted on recent stock-related debts, another factor pushing sentiment down. A briefing by Bakrie that had been planned for Thursday has been rescheduled to next week.

The Bakrie family, one of Indonesia’s richest, has continued to escape regulatory scrutiny by government officials despite a litany of complaints. The biggest came in May of 2006, when a gas well being drilled near Surabaya by Lapindo Brantas, a subsidiary of the Bakrie family-owned Energi Mega Perseda, blew out into a mud volcano that so far has drowned more than 14,000 homes, 33 schools, 65 mosques, a major toll road and an orphanage and continues to produce more than 20 Olympic swimming pools of stinking mud every day. Lapindo so far has agreed to pay out Rp4 trillion rupiah in compensation to villagers who have lost their homes.

Asia Sentinel reported on September 22 that mud and gas have continued erupting ever since, defying all efforts to stop it and inundating a vast area of Surabaya. Hundreds have been sent to hospitals with breathing difficulties. Scores of factories have heen closed, at least 90 hectares of paddy fields were ruined and fish farms have been destroyed.

Nonetheless, Indonesia’s Environment Ministry in September gave the company a green citation for complying with environmental standards. The award prompted embarrassment from officials and was soundly denounced by environmentalists.

Despite Lapindo’s claim of faultlessness, it is paying Rp4 trillion (US$437 million) in compensation to villagers who lost their homes to the mudflow. Most people seem to have received 20 percent of their payment but they are still waiting on the rest. 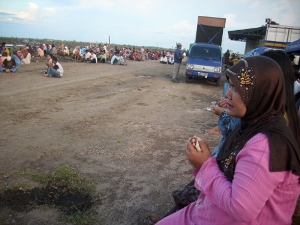 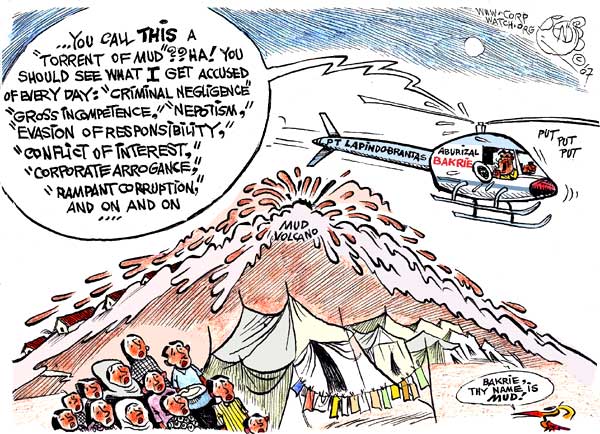 Mud and the Minister: A Tale of Woe in Java