The Sidoarjo regency administration is seeking a guarantee of safety from the government-backed Sidoarjo Mudflow Handling Agency (BPLS) that the dumping of hot mud into the River Porong will not trigger floods.

Since October, 2006, BPLS has redirected 69 million cubic meters of hot mud into the river, triggering sedimentation that could lead to floods during the rainy season, expected to start in November.

Sidoarjo regent Win Hendrarso warned BPLS that the increasingly shallow water on the riverbed as a result of the sedimentation could cause the river to overflow during the rainy season and his administration did not want mudflow victims to suffer yet more from such an incident.

“We don’t want to see floods as a result of a domino effect from the mudflow dump site. According to reports from the regency monitoring team and local people, residents are facing this threat because part of the river near Besuki village is now covered by mud,” he said when making a field tour to the mudflow-affected villages here on Tuesday.

He also said his staff would ask BPLS to take risk-prevention measures in case local people faced flooding, in anticipation of possible floods during the rainy season.” I don’t want any more people to fall victim to a new disaster in the future.”

Chairman of the expert team of the 10 November Institute of Technology (ITS) of Surabaya I Nyoman Sutantra said his team had frequently warned BPLS of the risks and that was why they had strongly opposed the dumping into the river.

“If BPLS continues dumping the mud into the river, the regencies of Sidoarjo, Pasuruan and Surabaya will be inundated during the incoming rainy season,” he told The Jakarta Post.

Sutantra deplored that BPLS has ignored the new method which his team had proposed as a better solution to stop the mud leaks and to handle the mud currently dumped into the river.

The expert team has called on BPLS to reroute the mudflow into the lower wetlands which later could be developed into farmland but the agency ignored this because it could not access adequate funds to acquire the wetlands now used by local farmers for shrimp and fish ponds.

Deputy chief of BPLS operational affairs Soffian Hadi defended the agency’s dump site policy, saying the river has functioned as the means for dumping the mud into the sea.

He said that the dumping of hot mud into the river has been reduced up to 40 percent and five heavy pumps were now deployed everyday to help push the stream of water to take the mud away. 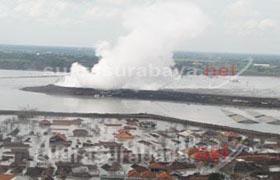