President Susilo Bambang Yudhoyono has made a scathing criticism of the poor handling of the Sidoarjo mudflow by the gas exploration firm PT Minarak Lapindo Jaya, partly owned by the family of Golkar Party chairman Aburizal Bakrie.

Andi Arief, special assistant to the President for disaster mitigation and social assistance disclosed that Yudhoyono had criticized Lapindo for failing to settle the problem of compensation for all mudflow victims in Sidoarjo, East Java, during a meeting with some Cabinet members and high-ranking officials on Saturday.

“Having observed the latest developments in the Sidoarjo mudflow saga, President Yudhoyono ordered an intensification of mitigation efforts. Besides the payments of compensation, which have yet to be completed by Lapindo, mitigation is also important,” Andi said.

He was referring to Minarak, a subsidiary of PT Lapindo Brantas, which is controlled by the Bakrie family.

“This measure is necessary because the mud has continued to spew out relentlessly,” he said.

The last time Yudhoyono made a public statement criticizing Lapindo was in February.

“I got a report that Lapindo still has not completed its responsibilities and Rp 800 billion (US$82.4 million) of compensation is still not paid,” Yudhoyono said in a Cabinet meeting.

“Please convey this message to Lapindo: They should keep their promises. If you play around with people you will carry the sins to the afterlife, tell them that,” he added.

Aburizal’s spokesman, Lalu Mara Satria Wangsa, acknowledged that Lapindo continued to fail to pay compensation to victims of the mudflow.

Lalu Mara was not sure if new payments had been made following Yudhoyono’s February statement.

“We are only human and we have shortcomings,” he said.

The Sidoardjo mudflow in East Java — which began in May 2006 after a blowout at one of Lapindo’s natural gas wells — destroyed hundreds of homes, swamped 720 hectares of land and displaced thousands of people.

Early this year, it was reported that Lapindo had paid Rp 3 trillion in compensation to the mudflow victims.

Lapindo has persistently denied its exploration activity was the cause of the mudflow, instead blaming an earthquake in Yogyakarta, hundreds of kilometers to the west.

The company only agreed to compensate victims within the boundaries of the affected area while compensation to those living outside the boundaries is paid with the State Budget.

The criteria used to define the “affected” area have never been clearly outlined, with the government continuing to make changes to the area over the past years.

In 2012, for example, the government decided to use State Budget to compensate residents living in some areas previously categorized as “affected”, which resulted in Lapindo paying less.

Many alleged the decision was a “reward” for Golkar’s tactical lobbying, which brought the House of Representatives to the endorsement of a policy on fuel subsidy. 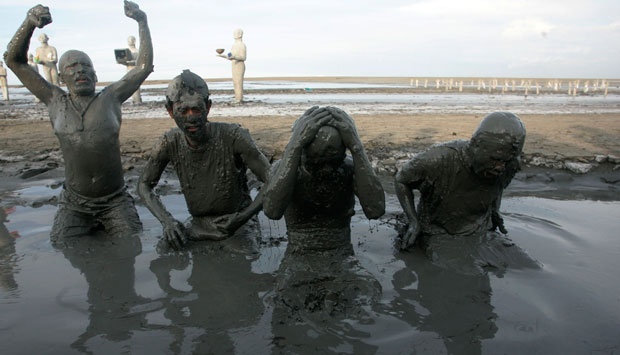