A Durham University scientist has played a key role in helping determine the cause of the Java mud volcano, Lusi.

Two years’ of global public debate over the possible causes of Lusi has finally concluded. A resounding vote of international petroleum geologists from around the globe, including Durham University geologist Professor Richard Davies, concluded the mud volcano was triggered by drilling of a nearby gas exploration well.

This may have implications for compensation of the local population affected.

Lusi started to erupt in East Java, Indonesia, on May 29th 2006, and is still spewing huge volumes of boiling mud over the surrounding area. It has displaced around 30,000 people from their homes and swamped 12 villages.

The cause of Lusi was considered at a debate this week at an International conference in Cape Town, South Africa, which concluded with a vote between 74 world-leading petroleum scientists who considered the evidence presented by four experts* in the field, one of whom was leading geologist Professor Richard Davies (pictured).

Some 42 scientists voted that gas exploration well, Banjar-Panji-1, which was being drilled by oil and gas company called Lapindo Brantas, was the cause.

Only 3 scientists voted for the alternative explanation – that the Yogyakarta earthquake two days before the eruption, whose epicentre was 280km from the mud volcano, was the cause. Some 16 scientists voted that the evidence was inconclusive and 13 that a combination of earthquake and drilling were the cause.

The vote, taken this week at the American Association of Petroleum Geologists Conference in South Africa*, follows months of scientific investigation and analysis published by some of the world’s leading experts in their field.

Key reasons supporting drilling rather than the earthquake as the cause include:

* the earthquake was too small and too far away to have had a role.
* the well was being drilled at the same time and only 150 m from the volcano site.
* the well took a huge influx of fluid the day before the eruption, resulting in pressures that the well could not tolerate.
* the pressure measured in the well after the influx provides strong evidence that the well was leaking and even evidence for the initial eruption at the surface.

Professor Richard Davies commented: “The conference allowed us to present new data on the pressures in the well the day before the eruption and these provide a compelling tape recording of the well as it started to leak.’’

“We were particularly grateful to Lapindo, the company involved in the drilling, who were widely applauded at the meeting for their willingness to take part in the discussion.”

Prof Davies added: “I remain convinced that drilling was the cause of the mud volcano. The opinion of the international scientists at the event in South Africa adds further weight to my conviction and the conclusions of many other leading scientists who have studied Lusi.”

Susila Lusiaga, a drilling engineer and one of the experts interviewed by the Indonesian police as an expert after being provided access to all the drilling data, said: “There is no question, the pressures in the well went way beyond what it could tolerate – and it triggered the mud volcano.”

Michael Manga, Professor of Earth and Planetary Science at the University of California, Berkeley, said: “The key observation from an earthquake perspective is that there were many much larger and quite a bit closer earthquakes that did not trigger an eruption’.

“The Yogyakarta earthquake was simply too small and too far away to initiate an eruption.”

Recent research by Durham University and the Institute of Technology Bandung in Indonesia, showed Lusi is collapsing by at about 13 m per year and sometimes 3 m overnight and could subside to depths of more than 140 metres, having a significant environmental impact on the surrounding area for years to come. 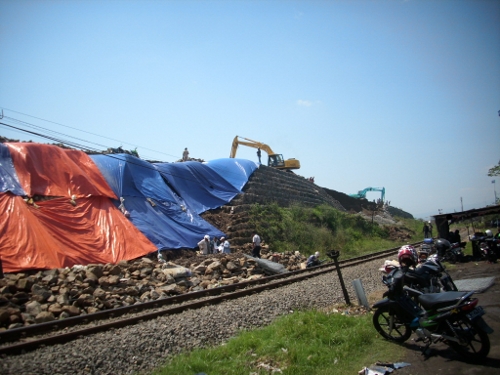